In 1999 Kadeer was jailed for eight years after she was convicted of providing state secrets to foreigners.

At the time she was a prominent businesswoman and had even been held up by the Chinese authorities as a success story for the country’s ethnic minorities. 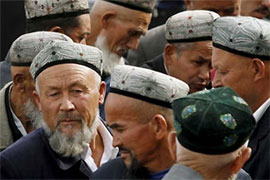 After an international campaign for her release, Kadeer was freed last year and sent into exile in the US.

She has since continued to speak out for the rights of China’s Uighur community and was recently elected as the president of the Germany-based World Uighur Congress (WUC).

Human rights groups say they fear that her election to the WUC may have prompted an apparent beating inflicted on another of Kadeer’s sons, who was being held in a detention centre in Urumqi on charges of subversion.

He is now reportedly being treated in hospital.

Meanwhile, one of Kadeer’s daughters is reported to have been placed under house arrest for unknown reasons.

In a statement, Kadeer condemned the conviction of her sons saying they were “completely innocent” and the case was clearly connected to her election as president of the WUC.

“The timing is more than cynical and less than human, and it shows the world yet again what the Chinese government and Communist Party does to its opponents and how little it cares for international opinion,” she said.

“When she was released from prison, Rebiya Kadeer was warned that if she continued her human rights work her family and businesses would be targeted”

Amnesty International said it was apparent that Rebiya Kadeer’s family was being punished for continuing to speak out for Uighur rights.

“When she was released from prison, Rebiya Kadeer was warned that if she continued her human rights work her family and businesses would be targeted.”

Officially Xinjiang has a semi-autonomous government, but China keeps a tight grip on the oil-rich province, which covers an area more than three times the size of France and dominates China’s border with Central Asia.

For years Uighur separatists have been waging a low-level campaign for a state they call East Turkestan, although Kadeer herself has not openly supported calls for independence.

Nonetheless human rights groups say China has used its campaign against the militants as a justification to squash religious freedoms and rights for Uighurs in general.

China has asked Albania to hand over five Chinese Muslims released from Guantanamo Bay prison and applying for asylum in Albania, saying they were members of a terrorist organisation.

Chinese Muslims too scared to talk

The same muttered phrase greets any curious visitor who strays into the mosques and bazaars dotting towns in Xinjiang province in China’s remote northwest.

China has marked the 50th anniversary of the establishment of Xinjiang as an autonomous region, as activists say anti-Chinese sentiment is rising in the Muslim-majority frontier region.

A worldwide group of exiled Uighur Muslims has criticised China over what it called oppression and exploitation in the Xinjiang region, and warned the region was being turned into a time bomb.