Bush said he would press the Iraqi prime minister, Nuri al-Maliki, who he will meet in Jordan, on action to quell the sectarian violence that has arisen since the US-led invasion in 2003.
Jordan’s King Abdullahç who will meet both leaders on Wednesday night, told the ABC channel that “something dramatic” must come out of the Bush-Maliki meeting to stop the violence in Iraq running out of control.
The UN secretary-General, Kofi Annan, has said Iraq is close to civil war and the US television network NBC has described it as such.
Henry Kissinger, the former US Secretary of State,  is among those who have expressed scepticism that the US goal of building democracy in Iraq is achievable.
Phased withdrawal
Bush said the latest wave of unrest began last February when a Shia mosque was bombed in Samarra, north of Baghdad.

“We’ve been in this phase for a while,” Bush said. “There’s a lot of sectarian violence taking place – fomented in my opinion because of these attacks by al-Qaeda causing people to seek reprisal.”

The president is facing growing pressure on Iraq. The Republican party was removed from power in Congress earlier this month and many critics of the Bush administration are calling for a phased withdrawal of US troops.
Bush is awaiting recommendations for Iraq from a panel led by James Baker, the former US Secretary of State, and ex-congressman Lee Hamilton.
The Iraq Study Group, which will present its findings in December, may recommend that Bush convene a regional conference on Iraq and that he consider talking directly to Iran and Syria to solicit their help.
Source: News Agencies 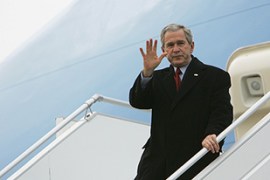 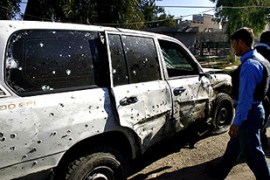 Four people are killed in Baghdad car-bombings as the violence continues.