Jacques Chirac, France’s current president, has not ruled out seeking a third term.

However, a serious bid is unlikely given his lack of popular support and his age – he turns 74 on Wednesday.

Nicolas Sarkozy, who leads Chirac’s conservative Union for a Popular Movement (UMP), is the only politician on the right who can mount a serious challenge for the presidency.

However, a long-running feud with Chirac has hampered his chances of success.

Sarkozy has said he will declare his presidential ambitions within the coming days.

Philippe Douste-Blazy, foreign minister, warned against divisions in the ruling party, saying that “… anybody who tries to go against the candidate chosen by the UMP after a debate will be creating a major risk of defeat for our side”.

A survey carried out by the BVA institute, published on Thursday, found that 42 per cent of French voters thought Royal would make a better president than Sarkozy, who had 36 per cent support. 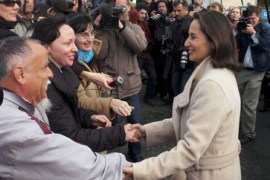