According to the inquiry, AWB executives authorised the payments as bogus transport fees to a Jordanian transport company part-owned by Saddam’s government.

Presenting his findings Cole said he “found no material that is any way suggestive of illegal activity by the Commonwealth or any of its officers.”

The Commonwealth of Australia is the formal title for the Australian government.

Prior to the report’s release, opposition politicians accused John Howard, the Australian prime minister, of negligence in their dealing with AWB.

They said Howard’s government had failed to respond to a string of warnings that AWB may have been violating international sanctions against the former Iraqi government.

Howard, who along with several officials from his government testified at the inquiry, has rejected the claims.

He has said he will follow the reports recommendations to set up a task force to consider prosecutions and “urgently review” the system that gives AWB a monopoly over Australia’s wheat exports.

Howard ordered an inquiry into AWB last year after a US-led investigation labelled the company as the largest source of suspect payments to the Saddam government under the scandal-tainted oil-for-food programme.

Payments to Saddam were illegal under UN sanctions imposed after the 1990 invasion of Kuwait.

The Australian prime minister has told an inquiry he was aware Saddam Hussein had broken sanctions in UN oil-for-food deals.

A scandal over Australia’s involvement in the Iraq oil-for-food programme is putting increasing pressure on the conservative government of John Howard, with calls for some of his senior ministers to resign. 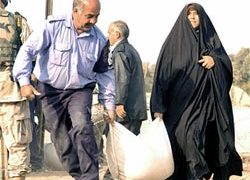 The Iraqi Grain Board has suspended business with Australian wheat exporter AWB until an Australian oil-for-food inquiry ends, AWB said.

The head of Australia’s monopoly wheat exporter has resigned amid allegations his company knowingly paid millions of dollars in kickbacks to Saddam Hussein under the UN Iraq oil-for-food programme.