France, which has a military contingent stationed in Chad, had warned its citizens in the unstable central African country that a rebel column was moving westwards on the main highway towards N’Djamena.

The French embassy in N’Djamena said on Sunday: “The military situation changed swiftly at the end of the morning. The presence of a large rebel column has been confirmed in the Batha region of the country, heading west.”

However, France later played down the threat, saying the column was no longer advancing but was still in Batha province, which could put it anywhere from 250 to 600km from N’Djamena.

Fighters from the Union of Forces for Development and Democracy [UFDD] left Abeche, 700km east of Chad’s capital, N’Djamena, after the army re-established control of the town.

Bichara Issa Djadallah, Chad’s defence minister said: “Abeche has been taken in its totality … The rebels fled at 4am[0300 GMT] this morning.”

Aid workers in Abeche said Chadian army soldiers moved into the town early on Sunday but said there was no sign of any major fighting.

The UFDD forces entered Abeche on Saturday and government forces pulled back to the city’s perimeter.

A senior foreign humanitarian official, who asked not to be named, said there “was some kind of attack by the rebels on the edge of Abeche”.
She said the sound of the fighting lasted for about 45 minutes and then subsided.

Abeche, about 160km from the border with Sudan, is the base for humanitarian organisations operating in the east of the landlocked country.

The east, where the UN refugee agency runs camps for thousands leaving Sudan’s Darfur region and for displaced Chadians, has seen a number of armed attacks in recent months. The Chad government says some of these offensives are backed by Sudan.

The last offensive in late October by the UFDD was pushed back by government forces.

Chad‘s government on Friday extended for six months a state of emergency in N’Djamena and other regions, including the east, which had been imposed on November 13 to tackle recent ethnic clashes and armed raids that have killed hundreds of villagers. 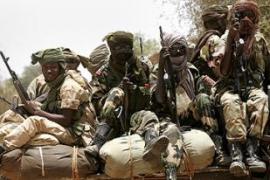