The Cedatos Gallup poll on Saturday showed support for Correa rose to 54 per cent while backing for Noboa dropped to 46 per cent, while about 17 per cent were undecided.

Polibio Cordova, head of Cedatos, said after the poll was released: “It will be hard for the trend to shift at the last minute, but there are still many undecided.”

The divided vote mirrors a broader split in Latin America between a new generation of leftist outsiders embodied by Chavez and pro-Washington political elites who critics say have failed to lift millions out of poverty.

Political turmoil has often rattled Ecuador where three presidents have been toppled by civil unrest or congressional infighting over the last 10 years.

More than nine million Ecuadoreans will vote, from the wealthy Quito neighbourhoods to remote, dusty Indian villages nestled in the Andes Mountains, where many feel they have not benefited from a recent surge in oil wealth.

After failing to win a majority in October’s first-round vote, Correa, 43, toned down promises to disband an unpopular Congress and gave more play to his offer of jobs and homes to the downtrodden.

Noboa, the scion of Ecuador’s wealthiest family, has used his riches and populist message to try to convince voters to choose him in his third attempt for the presidency of the world’s No 1 banana exporter.

The portly 56-year-old magnate has promised to build more than 800 homes a day for the poor and strengthen ties with the United States and Europe to lure foreign investment.

Juan Lapana, a 48-year-old gardener, said: “I’m going to make up my mind later in the polling station, because I don’t trust any of them.” 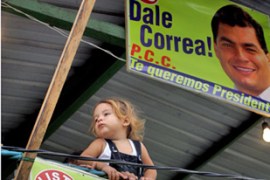 Rafael Correa pulls ahead in a poll, a day before Ecuador elects its president.

The probable candidates in Ecuador’s presidential runoff vote have begun trading blows, but the collapse of the electoral counting system means some votes are yet to be counted and has angered voters.