In a statement the UN agency said: “This is the first evidence we have that the Israeli forces laid new mines in south Lebanon in 2006.”

Israeli military officials said they were not convinced the mine in Friday’s explosion was Israeli.

The official said: “It could be a Hezbollah land mine or a mine laid by another country, and might not even be from the latest conflict. Many armies have fought there over many years.”

The officials, however, were evasive when asked whether Israel had laid new mines in Lebanon this summer.

There was no immediate comment from Israel on Saturday’s reported incident.

Dalya Farran, a spokeswoman for the centre, said its experts found the land mines and were able to tell they were new Israeli anti-personnel mines based on their “type, shape and condition”.

Farran said: “The entire area where the mine fields were found had been cleared by agency experts between 2002 and 2004, so clearly these are new ones.”

Lebanon’s south is riddled with land mines, laid by retreating Israeli soldiers who pulled out of the region in 2000, after an 18-year occupation.

Hezbollah has also planted mines to ward off Israeli forces.

UN experts say up to one million cluster bombs dropped by Israeli aircraft during the July-August war against Hezbollah remain unexploded in south Lebanon, where they continue to threaten civilians.

At least 24 people have died in cluster bomb explosions since the war ended on August 14.

Lebanon has long called for Israel to hand over maps of the minefields. 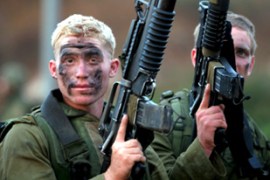 Israel probes use of cluster bombs

Israel’s military investigates its use of cluster bombs during the Lebanon war.

The Red Cross has called for an immediate ban on the type of cluster bombs used by the Israeli military in Lebanon.

Nearly all the victims of cluster bombs are civilians, a third of them children, according to a report by the campaign group Handicap International.

Human Rights Watch has accused the Shia movement Hezbollah of firing cluster munitions into civilian areas of Israel during the recent conflict there.