Curbs on weapons
Under the settlement it was decided that in the run up to next year’s constituent assembly elections the Maoists would restrict their 35,000 fighters to 28 camps and store their weapons in seven cantonments.
In return, the government will also confine its 90,000-strong army to its barracks and lock up an equal number of weapons.
The UN will supervise the management of weapons on both sides.
The agreement also made provision for the Maoists to join the mainstream government on December 1.
On Sunday, Prachanda, the Maoist leader, met with Girija Prasad Koirala, the Nepalese prime minister, but it was not clear what was discussed.
The peace agreement, reached on November 8, formally ended Nepal’s civil war in which more than 13,000 people were killed in over ten years of fighting.
Source : News Agencies 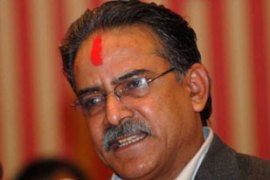 Nepal’s government and Maoist fighters agreed minutes after midnight on Wednesday to put rebel arms under UN watch in a move to rescue a peace process aimed at ending a conflict that has killed thousands.