By Sunday, the bodies of 21 miners were found in Jixi, while six miners were still missing. Four managed to escape.
In the Fuyuan mine, the number of dead rose from 20 to at least 32 overnight as rescuers found more bodies. Another 28 miners were reported injured in the blast.
China’s mining industry is notorious for accidents and fatalities. A total of 3,726 miners have died in more than 2,300 floods, blasts and other accidents in the nation’s coal mines in the first 10 months of 2006.
A report released by the government this month noted that coal mining safety had worsened since the beginning of the winter heating season.
The report said the sharp increase in demand for coal often caused mine managers to breach safety laws.
The number reported dead in Saturday’s blasts is the highest in a single day in recent weeks.
Source : News Agencies 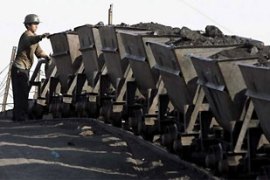 At least 25 miners are killed in the latest disaster to hit China’s deadly mining industry.