Kagame said: “The International Criminal Tribunal of Rwanda (ICTR) has information pointing to people who were responsible for gunning down Habyarimana’s plane, and these are Hutu extremists including senior commanders at the time of that government with the support of France.”

Kagame made his comments a day after Kigali severed diplomatic ties with Paris, furious at a French judge who issued arrest warrants for nine of Kagame’s associates and called for Kagame to face trial over the downing of Habyarimana’s plane.

The case has revived Rwanda’s festering enmity towards its former ally France, which it says armed, trained and gave orders to those who carried out the genocide.

Shortly after the interview, Rwandan officials said French ambassador Dominique Decherf had boarded a plane for Paris. The Belgian foreign ministry said it had agreed with Rwanda that it could protect the French embassy and French interests in Rwanda.

The charges have also dealt a personal blow to Kagame, whose rebel Tutsi Rwandan Patriotic Front (RPF), defeated the Hutu extremists in a march across the country to the capital Kigali.

He recalled how the press in 1994 reported plans to assassinate Habyarimana from within his own camp, and accused French soldiers and presidential guards of preventing UN forces from accessing the crash site as part of their inquiry.

“All this is put aside and the blame is apportioned to RPF. The French know who shot down the plane. It must be them who are responsible,” Kagame said.

France, one of the key supporters of the Hutu-led regime that governed the country in the years leading up to the genocide, has always denied any involvement in the massacres.

A French parliamentary commission in 1998 cleared Paris of responsibility for the genocide while admitting that “strategic errors” had been made.

But a separate inquiry requested by the families of the French crew flying Habyarimana’s plane and the late President’s widow Agathe, culminated in magistrate Jean-Louis Bruguiere’s decision this week to issue arrest warrants for nine Kagame aides, including the military chief of staff.

Kigali accuses Agathe of being the founder of Akazu, a small but powerful circle of Hutu family members and relatives who plotted to exterminate the Tutsis, and the government has long wanted the former first lady to face justice over the genocide.

“They [France] are harbouring Agathe Habyarimana whose evidence is being used by the judge and yet she is a killer,” Kagame said, adding that other former government officials had also sought refuge in France.

Kagame said there was evidence France tried to hamper the RPF’s fight against Rwanda’s then Hutu-dominated government, citing two events that took place during a visit to Paris in 1992. He said French authorities arrested him and that a senior French diplomat warned him that the RPF should stop fighting.

“For a French official as far back as 1992 to have said that I did not understand it at that time,” Kagame said. “I only understood it after the genocide took place. So that meant that they were involved in the planning.”

The breakdown in diplomatic relations comes a month after Rwanda began an investigation into allegations that France helped the Hutu government in the slaughter. 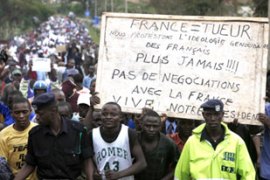 A Rwandan government-appointed commission is to investigate allegations that French troops supported militias behind the 1994 Rwandan genocide.

Rwanda minister not guilty of genocide

A former Rwandan government minister has been acquitted of genocide charges by a United Nations tribunal.