The International Security Assistance Force (ISAF) in Kabul, the Afghan capital, said the explosion had caused some buildings to collapse and that many civilians were among the dead.
The suicide attack was the 102nd in Afghanistan this year, said Major Luke Knittig, a spokesman for NATO’s International Security Assistance Force.
The attacks that have killed 241 people since the start of 2006, killing mostly civilians.
During the previous year the Taliban and their allies carried out around 20 suicide bomb attacks.
‘Many Taliban killed’
Taliban fighters also launched several attacks in southern Afghanistan on Friday and Saturday, sparking a series of clashes in which a Nato soldier and about 55 Taliban fighters were reportedly killed.
The weekend battles were in the district of Trim Kot in the province of Uruzgan and in adjoining Kandahar, where the Taliban movement originates.
ISAF said their forces in the province were attacked by a “large number of insurgents”.
The coalition soldiers returned fire and called in war planes.
ISAF said in a statement: “Initial battle damage assessment indicates that approximately 50 insurgents were killed in the attack. Regrettably, an ISAF soldier was also killed during the same incident.”
Nearly 120 foreign soldiers have died in combat in Afghanistan this year, up from just over 70 last year.
Source : Al Jazeera, News Agencies 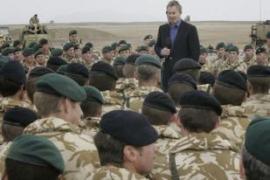 Future of world security “will be played out in this desert”, UK prime minister says.

Weary Afghans ‘may opt for Taliban’

Nato’s top commander in Afghanistan has warned that the country is at tipping point and Afghans are likely to switch their allegiance to the Taliban if there is no visible improvement in their lives in the next six months.