Berlusconi, who overcame prostate cancer in the 1990s, said at his villa after leaving the rally that he was going to Milan’s San Raffaele hospital where he would stay the night.

“They found something on the electrocardiogram, something like an irregular heartbeat, so they want to keep me under observation for 24 hours,” he said outside the villa.

Initally, aides said he had a strong drop in blood pressure.

Spokesman Paolo Bonaiuti later told RAI state TV: “Silvio Berlusconi had a strong drop in blood pressure, he’s much better now.”
Irene Pivetti, a former lower house speaker, said: “He felt unwell due to the tension, he is very sorry and wants to continue but the doctor has told him not to.”
About 30 minutes after he fell ill, Berlusconi walked out of the hall in Montecatini Terme, a spa town in northern Italy, to a waiting car, waving to supporters of his Forza Italia party.
Berlusconi, Italy’s richest man, went on trial last week charged with fraud at broadcaster Mediaset, which his family controls, the latest in a series of legal battles which have dogged him since he entered politics in 1994. He denies any wrongdoing.
Source: Al Jazeera 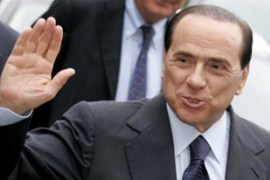 Former Italian prime minister says his critics are out for political gain.

An Italian judge has ordered that Silvio Berlusconi, the former prime minister, stand trial on corruption charges along with British lawyer David Mills.

Silvio Berlusconi is set to face a criminal investigation into alleged tax fraud after a Spanish judge lifted immunity accorded to him while he was Italy’s prime minister.