He was also charged with possessing items likely to be used for terrorist purposes including nail bombs, explosives, an axe and a garrotte, and of possessing a firearm or imitation firearm.

He was remanded in custody until December 22.

As he left court, he shouted: “Ulster is not for sale. No Surrender.”

Friday’s incident disrupted discussions on the formation of a power-sharing assembly, which would unite in government parties with starkly opposing political and religious views after decades of sectarian conflict in which about 3,600 people died.

The debate had to be suspended just 40 minutes in and without a clear indication from pro-British hardliners, the Democratic Unionist party, as to who they would nominate to lead the assembly.

Ian Paisley, the leader of the Democratic Unionist party, refused to accept a nomination to lead the assembly, saying that he would only work with Sinn Fein when it begins to support the police force.

Stone was jailed for life after the 1988 cemetery attack but was released six years ago under Northern Ireland’s Good Friday peace agreement. He vowed then that his days as a paramilitary were over.

Police told the court that Stone indicated that he acted alone in Friday’s attack. 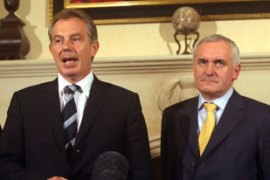