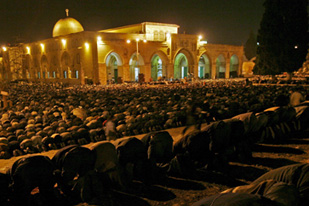 The Dome of the Rock  is Islam’s third-holiest site

Jerusalem (al-Quds in Arabic) holds spiritual significance for three of the world’s main religions, a holy place for Islam, Judaism and Christianity.

Over thousands of years it has been occupied by a series of empires and rulers.

The effective division of the city since 1948 lies close to the heart of the Arab-Israeli conflict and the results of this impasse are seen in the everyday lives of its citizens.

A number of sites in Jerusalem have religious significance, among which are the al-Aqsa Mosque and Dome of the Rock for Muslims, Temple Mount and its Western Wall for Jews and the Church of the Holy Sepulchre for Christians.

The al-Aqsa mosque is Islam’s third-holiest site and Muslims faced this mosque in prayer before the direction was changed to Mecca.

The Dome of the Rock marks the place where Muslims believe that the Prophet Muhammad ascended to heaven and where he was shown how to pray, one of the five pillars of Islam.

The Temple Mount is sacred to Jews because historically it is the site of the First and Second Temple.

Temple Mount is known to Muslims as al-Haram-al-Sharif, or the Noble Sanctuary. Jews and Muslims believe it to be the place where the Prophet Ibrahim was prevented from sacrificing his son Ismail (Isaac to Jews and Christians).

Below the Temple Mount is the Western Wall, the holiest site in Judaism.

It is part of the retaining wall of the Temple Mount and dates back to the times of Herod the Great.

The ground on which the Church of the Holy Sepulchre stands is believed by Christians to be the place where Jesus was crucified and, nearby, where he was buried.

It is maintained and administered by several Christian communions, including the Greek Orthodox, Armenian Apostolic and Roman Catholic churches.

For centuries, two neutral neighbour Muslim families appointed by Saladin, the Nuseibeh and Joudeh families, were the custodians of the key to, what was at the time, the single door to the church.

For many people throughout history, Jerusalem has been a prized possession and much fought over.

The Canaanite and later arriving Philistines are believed to be the earliest known ancestors to present day Palestinians.

Over many centuries the city has been occupied by the Israelite King David, the Babylonians, Alexander the Great, the Egyptian Ptolmies, the Syrian Seleucids and the Maccabean empire.

During the Roman era, the town of Bethlehem near Jerusalem witnessed the birth of Jesus Christ, a prophet in Islam and, in the Christian belief, the son of God.

By AD 638, with the rapid spread of a new religion in the region, Islam, the city was captured by an army led by Abu Ubaydah under the caliphate of Umar ibn al-Khattab and Islam came to Palestine.

In AD 1099, Jerusalem was conquered by the Crusaders and its inhabitants slaughtered (Muslim, Jews and Christians alike). Saladin recaptured the city in AD 1187.

Thereafter, under Mamluk and then Ottoman rule, Jerusalem was rebuilt and restored, especially by Sulayman II who built walls, gates, towers and aqueducts for the city.

By the 19th century, at the onset of Ottoman collapse, Jewish immigration into Jerusalem was on the rise. By 1900, Jews made up the largest community in the city and the expanded settlement outside the Old City walls.

After the first world war, Jerusalem was made the capital of Palestine but held under British mandate.

As the end of the mandate neared, Arabs and Jews both sought to hold possession of the city.

But the minorities in the city, such as the Christians, favoured a city open to all three religions.

That opinion was given weight by Europeans at the United Nations, which, in partitioning Palestine into Arab and Jewish states, declared that Jerusalem would be an internationally administered city, but in a projected Arab state.

Even before the partition came in to effect on May 14, 1948, fighting between Jews and Arabs broke out in the city.

On May 28, Jewish forces in the Old City surrendered but the New City remained in Jewish hands.

The Old City and all areas held by the Arab Legion – the quadrant marking East Jerusalem – were annexed by Jordan in April 1949.

The newly created state of Israel responded by retaining the area it held and on December 14, 1949, the New City of Jerusalem was declared the capital of Israel.

In 1967, Israeli forces took the Old City in the Six-Day War with Egypt, Syria and Jordan. They formally annexed the Old City and placed all Jerusalem under central administration.

Arab East Jerusalemites were offered regular citizenship but nearly all chose to maintain their status as Jordanians.

Israel then ejected many Arabs from the Old City, but assured them access to the holy sites for Muslims and Christians.

In July 1980, Israel’s parliament approved a bill affirming Jerusalem as the country’s historic and undivided capital for all Jews.

However, the position of successive Israeli governments has been to keep Tel Aviv as the capital city (as recognised by the UN) while basing institutions such as the Knesset, supreme court, ministry of foreign affairs and prime minister’s office in Jerusalem.

Since the occupation of East Jerusalem in 1967, Israel has pursued a policy of limiting new construction within the Palestinian neighbourhoods of the city.

The Israeli authorities frequently demolish Palestinian homes in East Jerusalem on the grounds that they have been built without a permit.

However, it is almost impossible for most Palestinians in east Jerusalem to obtain a permit to build a home on their own land and as a result thousands of homes are potentially  at risk.

In the past two years the Jerusalem Municipality has significantly stepped up its demolition process.

According to Amnesty International, the UK-based human rights organisation, about 200 Palestinian homes have been demolished in East Jerusalem since the beginning of 2004, leaving more than 600 people homeless.

In 1967 Israel started the development of settlements in Jerusalem and, in other parts of Palestine, this has since intensified.

The majority of Arabs living in East Jerusalem refuse to become Israeli citizens since it would prevent their travel to the West Bank.

They do, however, hold legal permanent resident status to reside and travel within Israel, and are entitled to Israeli social security benefits and healthcare.

However, this status is lost after even short-term residence outside Israel proper or East Jerusalem and is not automatically inherited by children.

Different kinds of identification cards for people in the villages near Jerusalem were introduced in 1967.

Some have the highly prized blue Jerusalem identification card, while others have green or red West Bank ones.

Until recently, although unwelcome, this did not have a serious impact on people’s everyday lives.

However, since 2002, the Israeli government has greatly increased the construction of its separation barrier, a series of walls and fencing that serves to divide the West Bank from Israel and which divides large parts of Jerusalem.

As a result, it has become increasingly difficult for people living in the eastern suburbs of Jerusalem to go about their daily business if they possess a West Bank card which limits their freedom of movement.

Although Israel argues that the purpose of the wall is for security, many people say it is being used to force as many Palestinians as possible to move to the West Bank, allowing Israel to annex more land.

The separation barrier plays a role in Israel’s most extensive plan of illegal settlement in the area, the E1 programme.

This plan was formulated in 1995 by Yitzhak Rabin, the Israeli Labour party leader at the time.

It was designed to populate the area west of Maale Adumim, Israel’s most controversial illegal settlement, established in 1975.

The basis of the plan is to create an Israeli community which will create a physical barrier that will cut off Jerusalem from the West Bank and break the geographical contiguity of the West Bank into two separate entities, one to the north of Jerusalem and the other to the south.

Miftah, The Palestinian Initiative for the Promotion of Global Dialogue and Democracy, says that as part of the plan, in August 2005 Israel confiscated more than 1,585 dunnums (about 400 acres) of Palestinian land in East Jerusalem.

The organisation says that through the annexation of these areas, Israel plans to add 25,000 settlers to Ma’ale Adumin’s existing population, which is currently 30,000.

The implementation of the plan had been frozen in mid-2005 after a request by the US.

However, in March 2006, Israel began the construction of a new police headquarters for the West Bank in the E1 area, in defiance of the Bush administration and objections from a number of countries.

The full implementation of the plan will effectively cut off more than 200,000 Jerusalemites from their social, political and economic livelihood in the West Bank.

Israel insists that Jerusalem is indivisible and will always remain the country’s eternal capital.

However, there is a growing debate in Israel about reincorporating it as part of the West Bank and any finalised Palestinian state.

This would include outlying Palestinian villages and communities which were not part of Jordanian East Jerusalem from 1949 until 1967 and were annexed by Israel to Jerusalem in 1967.

In a poll last year by the Israeli newspaper Yedioth Ahronoth, 49 per cent of Israelis backed a division of Jerusalem as part of a peace settlement.

It is unclear how the Jerusalem question can be resolved to the satisfaction of all parties, but according to the Oslo Agreements the final status of Jerusalem should be determined by peaceful negotiation.

A quarter of a million worshippers have flooded Jerusalem’s Old City to pray at the al-Aqsa mosque compound. 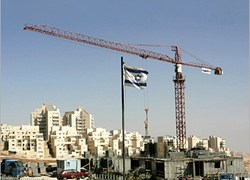 The Israeli authorities have invited tenders for the construction of about 700 new housing units in two existing Jewish settlements in the occupied West Bank.

El Salvador, the only country that still has its embassy in Jerusalem, is to move it to Tel Aviv.