Sheikh Ali Salman, leader of al-Wefaq national Islamic society, the largest opposition group which represents the kingdom’s majority Shia, said his group would know Saturday’s polls were rigged if it did not win 13 of parliament’s 40 seats.

Salman said: “According to detailed indicators it would be impossible to win less than 13 seats… rigging the elections will not be accepted. All means of protest are open.”

“The nation needs urgent care. More than 40 per cent of Bahrainis are living below the poverty line.”

The demonstration, which had been approved by authorities, passed off peacefully and there was no apparent police presence.

One demonstrator said: “The presence of foreign press made the authorities keep the security forces away. They don’t want the reality to be shown to the  rest of the world.”

The interior ministry said that late on Friday security forces arrested two people in the Shia suburb of Sanabis as some 15 protesters were “committing acts of vandalism.”

However, witnesses said many more were arrested, claiming that the gathering was a small protest against elections and that riot police beat the demonstrators “mercilessly”.

Reports said a few burnt tyres were still smouldering in the centre of the suburb one hour after the incident, while a handful of riot police vehicles stood at the suburb’s junctions.

A total of 207 candidates are standing in the election, including 17 women. Municipal elections are bring held simultaneously. 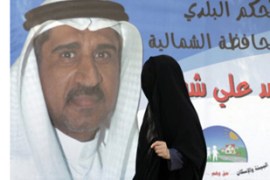