The first two attempts to unseat Chen failed due poor support from the Nationalist and People First parties.

A prosecutor said he had sufficient evidence to charge Chen, if not for his presidential immunity. Chen’s term expires in 2008.

Several aides were also charged the same day for misusing the funds.

The action against Chen was preceded by street protests in September and October demanding his resignation.

Friday’s vote followed two days of debate in parliament punctuated by shouts and waving of banners.

Opposition members of parliament have been urging Taiwan citizens to vote out the ruling party.

This week, Ma Ying-jeou, the chairman of the Nationalist party, was called for questioning over the use of party assets.

The mayoral elections in Taiwan’s two biggest cities are scheduled for December 9 and television polls show the ruling party candidates trailing in both races. 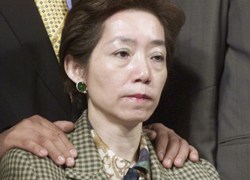 Taiwan prosecutors will file corruption charges against the wife of president Chen Shui-bian, a scandal leading to widespread protests and calls for his removal.

Tens of thousands of Taiwanese have taken to the streets of the capital Taipai to demand the president’s resignation over corruption allegations.