Flintoff was again the catalyst for a possible England fightback when he uprooted Mike Hussey’s off-stump with a gem of a delivery when the batsman was on 86 and the score on 407.

The England captain’s admirable efforts mirrored his performance on Day 1, but it will be a long series for him, let alone his side, if he has to come to their rescue every time they run into trouble.

Finally, England paceman Matthew Hoggard began to exhibit some of the dangerous swing bowling that had the Aussies in trouble in the last Ashes series when he took the wickets of Ponting for 196 and Adam Gilchrist for a duck, both LBW in the same over.

Hoggard’s brief ray of hope for England was soon forgotten though as a timely 56 from Michal Clarke along with aggressive batting from Brett Lee (43 not out) and Stuart Clark helped push the Australian total past 600.

Playing in his first Test on Australian soil, Clark produced an innings that was thoroughly entertaining for the crowd, but utterly frustrating for England, smashing two sixes and three fours in his 39 runs off 23 balls.

The New South Welshman belted two consecutive deliveries from James Anderson into the stands for maximum scores before Flintoff once again injected himself into the attack to dismiss Clark with a good delivery, snaring his fourth wicket.

Ponting called his players in with the score on 602 leaving England to face a tricky 17 overs before stumps.

England openers Andrew Strauss and Alastair Cook showed excellent patience early and were not tempted into playing at well pitched deliveries from Lee and Glenn McGrath.

Playing in his first Test against Australia, Cook, who has scored three centuries and two eighties in his nine Tests so far, got off the mark with a single off McGrath, and remained fully composed after swaying away from a fierce Lee bouncer.

But the wily McGrath would get the better of both openers with Strauss (12) firstly top edging a pull shot that went high in the air to the third man area.

Hussey and Lee charged in to take the chance, and with both men’s eyes firmly fixed on the ball, there were flashbacks to Steve Waugh and Jason Gillespie’s horrific collision when fielding against Sri Lanka at Kandy in 1999.

The players did collide, but Lee pulled out at the last second leaving Hussey to hold on to a great catch, but also cause a slight gash above his teammate’s left knee from his boot sprig.

With the very next delivery McGrath had Cook (11) defending awkwardly and nicking the ball into the waiting hands of Shane Warne at first slip to make it 28 for 2, bringing Paul Collingwood to the crease.

Lee had to leave the field for treatment on his cut knee, but this was a blessing in disguise for Australia with Clark coming in to the attack and bowling excellent line and length, removing Collingwood caught behind for five and finishing with the figures of 1 for 9 off six overs.

England are in real trouble as the Gabba pitch starts to deteriorate quicker than usual with what would normally be fourth day cracks sure to start widening on the third day.

The saving grace for the Ashes holders is that their two most in-form batsmen are at the crease in Ian Bell and Kevin Pietersen, and if this pair can survive the first hour on Day 3, they could set about getting big scores of their own and saving the first Test. 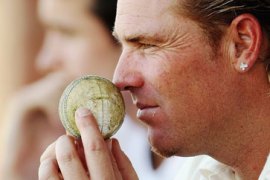 The big men of the Ashes

Simon Pijaca looks at the characters of this year’s Ashes series.