The World Food Programme is sending about 100 tons of food to help victims in the Dadaab region of eastern Kenya.

“The hundreds of thousands of people driven from their homes in both Somalia and Kenya by the floods need our help right now and delivering assistance by air is the only option with large numbers of them cut off by the floodwaters,” Burkard Oberle, WFP’s Kenya director, said.

The UN high commissioner for refugees said more than 100,000 refugees had lost their homes when three camps in the area were cut off by the floods.

Water from the Tana River flowing through Garissa in northeastern Kenya was so powerful that residents had to form human chains so they wouldn’t get swept away.

On Wednesday, officials reported 20 had died in Kenya, 52 in Somalia and 80 in Ethiopia.

In Somalia, officials said the flooding had covered thousands of hectares of farmlands and destroyed the key roads linking Mogadishu to central regions of the country.

They said that hundreds of villagers who had been displaced to upland regions had been eating raw mangoes and leaves since most of the food stores were washed away by the floods.

The Somali government has warned of an imminent humanitarian  disaster if aid agencies do not rapidly deliver emergency supplies to the Gedo, Juba and Hiraan regions.

The International Committee of the Red Cross said it had started airlifting tarpaulins for about 324,000 Somalis.

The UN office for the co-ordination of humanitarian affairs has confirmed cases of cholera in southern Somalia.

Cholera can be treated easily, but is a major killer in developing countries. It is transmitted through contaminated water and is linked to poor hygiene, overcrowding and inadequate sanitation.

The UN says that up to 1.8 million people have been affected by the torrential rains. 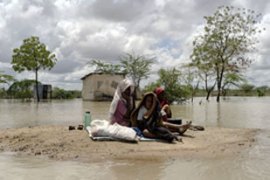 More than 80 dead in Africa floods