During his four years in office Balkenende – who has been likened to Harry Potter, the fictional English wizard, because of his looks and inexperience – has brought conservative conformity and economic recovery to the Netherlands.

But, led by Rita Verdonk, the immigration minister, the government has also ended to the country’s traditionally open attitude towrads foreigners.

If Balkenende is returned to power, he is likely to push through a new law banning Islamic face coverings such as the niqab.

Although Bos agreed with most of the government’s immigration crackdown, he now wants it tempered by a return to the Netherlands’ traditional acceptance of new comers.

“The key to a successful integration policy is twofold,” Bos said in a televised debate on Tuesday night.

“On one side … we have to ask people to prepare to come to the Netherlands so they can adapt to our society’s core values. But we must also ask our society to do something – make people feel welcome here.”

Bos also says the first thing he would do if he becomes prime minister is grant citizenship to thousands of people whose asylum applications have been rejected and who have been living illegally in the Netherlands.

Balkenende has refused to do that and said his government’s immigration and integration policies had made progress in the last four years, “but there is still work to do.”

Balkenende’s Christian Democrats currently have 44 seats in the 150-seat lower house, compared to 42 for Labour. 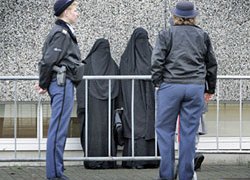 The Dutch government has said it will seek a way of banning the wearing of burqas and other Muslim face veils in public places, possibly becoming the first European country to impose such a ruling.