Request rejected
Officials on the the Vienna-based organisation’s 35-nation board of governors have indefinitely blocked Iran’s request, although the ruling does leave open the possibility of revisiting it in the future.

Tehran denies claims it is working on a nuclear weapons programme, saying it is only interested in for producing energy and the Arak reactor would be used to create radio-isotopes for medical purposes.

Iranian requests for IAEA technical assistance on seven other nuclear energy projects were approved in a compromise reached ahead of the IAEA board meeting.
The projects were judged not to pose a risk of being diverted towards the manufacture of nuclear arms.
Iran’s heavy water Arak reactor is due for completion in 2009.
Source : News Agencies 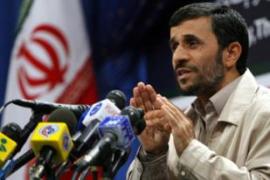