Israel was forced to abandon an air strike on the home of Mohammed Baroud, a leader of the Popular Resistance Committees, after Palestinian civilians surrounded the building.
Hundreds of people were called to protect Baroud’s home in the northern town of Beit Lahiya, on Saturday, after he was informed by the Israeli forces that the building was going to be bombed.
Sarah Leah Whitson, HRW’s Middle East director said: “There is no excuse for calling civilians to the scene of a planned attack. Whether or not the home is a legitimate military target, knowingly asking civilians to stand in harm’s way is unlawful.”
She urged Ismail Haniya, the Palestinian prime minister and head of the Hamas-led government, to denounce the tactic.
Israeli strikes
Israel routinely orders residents out of their homes before air attacks on what it says are suspected weapons-storage facilities.
Nour Odeh, Al Jazeera’s correspondent in Gaza, reported that the ‘human shield’ gathering at Baroud’s home was the first time such an act had been seen in the Gaza Strip.
Later an Israeli military spokesman confirmed that the raid had been called off because of the protest.
HRW also demanded an Israeli explanation for its air strikes.
Whitson said: “The IDF should immediately explain what its military objective is in targeting the homes that it has ordered to be vacated.”
According B’tselem, the Israeli human rights information organisation,  the Israeli forces destroyed 251 homes in Gaza leaving 1,577 people homeless between July and November 15 2006.
Source: Al Jazeera 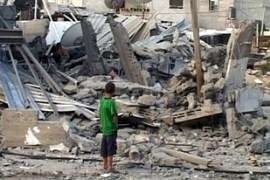 Hundreds of Palestinians form a human shield against Israeli airstrikes in the Gaza strip.