The pope’s controversial visit to the predominantly Muslim country is expected to trigger more protests from Muslim hardliners and nationalist groups before he arrives in Turkey on November 28.
Turkish officials expressed anger in September after the pope made comments taken as indicating he believed Islam was violent and irrational.
They are now billing the visit as an opportunity to heal the wounds.
State-run Anatolian news agency said police had first urged tourists to leave the building in the heart of the old city and surrounded by monuments from its Byzantine and Ottoman history.
“Don’t make a mistake pope, don’t try our patience,” the protesters chanted, holding up a Turkish flag and a banner identifying them as being from an Istanbul branch of the “Alperen Ocaklari” [Alperen Association], an ultra-nationalist group.
The group is considered to be an offshoot of the “Grey Wolves”, a Turkish right-wing group dating back to the 1970s. The man who attempted to assassinate Pope John Paul II, Mehmet Ali Agca, was a member of the group.
Vatican unruffled
At the Vatican, father Federico Lombardi, the chief spokesman, said the Holy See was not overly worried about the latest anti-pope protest. “I still consider these episodes limited enough not to put in doubt the substance or atmosphere of the trip, which we think will take place in a calm way,” he said.
Security forces are bracing for large protests. The Islamist Felicity Party plans to ferry 75,000 people by bus to Istanbul on Sunday to protest, though many more are expected.
“We don’t want to see in our country a pope who is insidious enough to plan under cover his modern crusader aggression and ignorant enough to describe the Prophet Mohammed as a terrorist,” the party said in its invitation to the protest.
Source : News Agencies 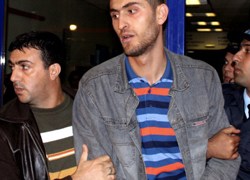 Turkish police have detained a man who fired shots in front of the Italian consulate in Istanbul to protest against Pope Benedict’s visit to the country later this month.

A letter written by 38 Muslim scholars from around the world has been delivered to Pope Benedict, criticising his ‘misreading’ of the Quran and listing factual errors in his recent speech on Islam that provoked protests across the Muslim world.

Turkish hijacker had message for pope

A Turkish man who surrendered after hijacking an airliner with 113 people on board told the pilot he wanted to give a message to the pope.