The assassination of Pierre Gemayel, aged 34, is the second killing to hit one of Lebanon’s most prominent Christian families.

The Gemayel political dynasty was founded in the 1930s by the assassinated Lebanese industry minister’s grandfather, also named Pierre.

The younger Pierre Gemayel, who was first elected to parliament in 2000, was the nephew of Bashir Gemayel, who was killed only nine days before being sworn in as president of Lebanon in 1982, when the country was wracked by civil war.

Bashir’s brother, and Pierre‘s father, Amin, was elected to replace Bashir, and served as president of Lebanon until 1988, when he went into voluntary exile.

Bashir’s four-year-old daughter, Maya, was killed in a car bomb attack that targeted her father in 1981.

The elder Pierre, known as Sheikh Pierre, was born in 1905 in the mountainous village of Bikfaya.

The Mount Lebanon region is a traditional stronghold of the country’s Maronite Christian community.

A pharmacist by training, Pierre was a prominent athlete, and led the national team to the 1936 Olympics in Berlin, where he was impressed by the formidable organization of the Nazi party.

He twice failed in a bid for the presidency.

His son Bashir also had a turbulent political career. In 1974, he formed a far-right Christian militia to fight against Muslim Lebanese and Palestinian militants. Israel backed the group. 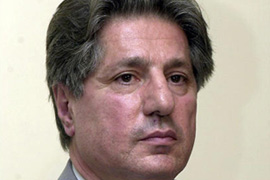 Bashir was elected to Lebanon’s top post during the height of the civil war, in 1982.

He was killed in an explosion at party headquarters in Beirut‘s Christian district of Ashrafieh before he could take office.

His brother, Amin, who is the father of Tuesday’s latest murder victim, was a much more moderate figure and was elected to replace him.

But only 15 minutes before his term expired in 1988, Amin appointed Lebanese army commander General Michel Aoun as prime minister, despite him being a Maronite Christian. Under Lebanon‘s delicate balance of religious groups, the prime minister’s post is always held by a Sunni Muslim.

The younger Pierre Gemayel, a lawyer by profession, had established a reputation as a moderate.

He was a vocal critic of Syria‘s military presence and political domination of Lebanon, and was an active member of the anti-Syrian parliamentary majority, the March 14 Forces.