His body was driven from a hospital near Beirut to Bekfaya, northeast of the capital, where hundreds of sympathisers walked behind the coffin, waving Phalange party flags.
As the procession made its way to Gemayel’s family home, women on balconies threw rice at the coffin.
Fadi Jalakh, a mourner, said: “Those who killed him don’t want the Lebanese to unite. Anything after this is going to make things worse.”
There was a heavy police and army presence in Bekfaya and in Christian neighbourhoods of Beirut.
Increased tensions

“It seems the Syrian regime will continue with the assassinations. I expect more assassinations but no matter what they do, we are here and we will be victorious,” he said.
Osama Safa, a Lebanese political analyst, told Al Jazeera that sectarian tensions were at their “highest peaks for some time”.
A civil war, Safa said, “was no longer out of the question”.
UN help
Fouad Siniora, the Lebanese prime minister, has meanwhile asked the United Nations to help Beirut investigate the assassination of  Gemayel.

Siniora wrote to Kofi Annan, the UN secretary-general, on Tuesday that his government wanted Gemayel’s murder added to the ongoing UN inquiry into the February 2005 murder of former Lebanese prime minister Rafik al-Hariri.

On Tuesday, the UN Security Council approved plans for a special international court to try suspects in al-Hariri’s murder.
Gemayel’s killing has heightened tensions between the anti-Syrian government and the pro-Damascus opposition led by Hezbollah, the powerful Shia Muslim group.
Hezbollah and its allies have threatened to take to the streets to topple Siniora’s government, saying it has lost its legitimacy since Shia Muslims were no longer represented.
A political source close to the group said Tuesday’s murder would force it to revise its plans and delay the protests.
Source : News Agencies 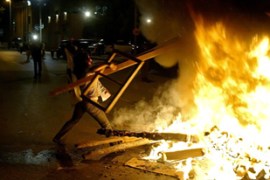 The Syrian government denies being involved in the assassination of Pierre Gemayel.