Blair stressed the importance of progress in the Middle East peace process, and also in winning the US-led “war on terror”.

Speaking on the Frost Over the World programme, Frost suggested that since the 2003 invasion of Iraq events there had been “pretty much of a disaster”.

Blair replied: “It has, but you see what I say to people is why is it difficult in Iraq?

A Downing Street spokesperson later said Blair’s views had been misrepresented in the interview, and the UK leader had simply acknowledged the question when he agreed with Frost’s suggestion.

“The prime minister does not use the word disaster,” the spokesperson said.

“What he does is set out that the violence in Iraq is of course hugely regrettable, tragic and very difficult, but that this violence is a result of malicious external intervention, not some planning error three years ago.”

Blair also called for greater involvement of Iran and Syria – once described by George Bush as the “axis of evil” – in resolving the Middle East impasse.

“What we’re saying to you is very clear … If you are prepared to be part of the solution there is a partnership available to you, but at the moment … you are behaving in such a way that makes a partnership impossible.”

He rejected claims that talking to Iran and Syria amounted to “appeasement”.

Blair insisted progress in the Middle East would send a signal that westerners and Christians were not in conflict with Muslims.

“It was a battle between all those who believe in tolerance, in living together in harmony, in a non sectarian future against those who want to divide us.”

Blair also urged Iran and Syria to do more to curb the violence in Iraq but said that the two “have different interests in the region.”

“What we’re saying to you is very clear … If you are prepared to be part of the solution there is a partnership available to you, but at the moment … you are behaving in such a way that makes a partnership impossible.”

“[Iraq is] not difficult because of some accident in planning”

Blair has previously committed himself to bringing peace to the Middle East, but during the interview he did not immediately endorse a new peace proposal initiated by France and Spain.

“It’s good to have everyone on the same page; but its really about making sure that we make progress to the two-state solution,” he said.

He said it was vital that the international community “manages to get into a situation where we are negotiating about the details of peace rather than looking at the appalling consequences of conflict”.

The British prime minister has been in office for nine years and is expected to step down within months.

Blair has said that he wants a new peace deal in the Middle East to be his legacy and warned that the greatest challenge facing with world now was “religious extremism”.

Marwan Qabalan, a political analyst from the University of Damascus in Syria, told Al Jazeera that Tony Blair’s interview contained many contradictions and indicated that Britain and the US needed to decide on a common policy towards Syria and Iran.

He said: “It might be in the end that they [Britain and the US] have to decide if Syria and Iran are supporting the insurgency or whether Syria and Iran have real influence in Iraq, so that they can be getting involved in the political process to stabilise that country [Iraq].” 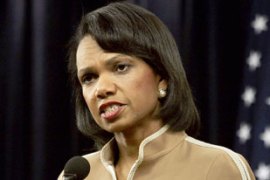 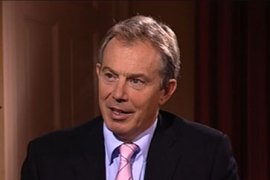