He said: “Our current approximation of the value of the damage done is roughly between … US$ 60m [and] US$ 75m.”

Some blamed the riots on “thugs” hired by business owners to use a pro-democracy rally as a front to attack rival operators.

Many stores owned by ethnic Chinese traders were destroyed in the violence.

Rioters also destroyed government offices and a supermarket owned by the family of Fred Sevele, the prime minister.

Mike Jones, a New Zealander who runs a business in Tonga, claimed that some of the rioters were paid “five dollars a day” to cause trouble by some business owners.

He said: “It wasn’t a riot as such. It was an organised attempt to cut out all of the Chinese, and whatever businesses were in opposition.”

Helen Clark, the prime minister of New Zealand, said: “What began as peaceful protest had other elements come in and take over.

“Whether their motivation was just sheer destruction, whether there was alcohol and other influences at work, who knows. That will come out in the full investigation.”

Senituli said Tongan authorities were investigating the cause of the riot with the help of police from Australia and New Zealand.

He said a business group that demanded Sevele step down two weeks prior to the riot “are certainly part of the list of people that are being investigated”.

International airline flights, which had been suspended since the riot, resumed on Monday after foreign forces secured the airport. Hundreds of tourists are fleeing the country. 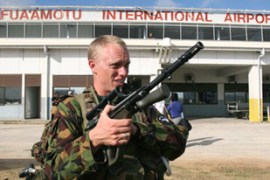 The Australian foreign minister says foreign nationals to be evacuated. 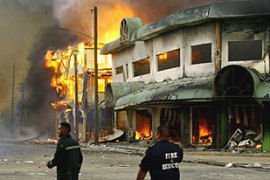