On the bustling streets of Yangon, there is little on the surface to differentiate it from other South-east Asian cities.

The buses are overloaded, hawkers at street stalls yell out to attract buyers. In the music shops you can buy Myanmar rap, while hip hop-style graffiti is daubed on pedestrian crossings.

But this is urban life under a military government and things are not what they seem.

Residents go about their daily business in spite of US sanctions aimed at forcing the hand of the military government, and in spite of the extraordinary control that government exercises in every facet of their lives.

In the main streets it seems as if there is brisk trade at the stalls, but take a walk down the back streets, you can see how sanctions have forced people to be resourceful.

Repair shops are a common sight in a country where goods need to last longer.

The government says the economy is growing at 12 per cent a year – faster than China – but there is little evidence to bear that out.

In a country used to isolation, sanctions have only hardened the military’s position against the US.

Khin Zaw Win was detained for 11 years because of his human rights work. Freed last year, he is no supporter of the government but he now speaks out against sanctions.

“In our specific case they haven’t worked at all, they’ve made things worse in more ways than one,” he told us.

“They make the humanitarian situation here worse and it makes relations with the United States worse …they’ve been soured.”

Myanmar’s isolation is leading to many of the country’s problems today.

Under the military it is often regarded in the West as a rogue state – but all of its Asian neighbours, including economic giants China and India, are doing business here. And that is why the government has been able to get on despite the sanctions so far.

The generals’ reputation was tarnished by a brutal crackdown against student pro-democracy protests on the streets of Yangon in 1988.

Officially, hundreds died. Unofficially, the tally runs into the thousands.

But most people are afraid to speak about her and her name is rarely mentioned.

She is nonetheless an iconic figure and “The Lady”, as she is known, is the focus for those opposed to the military leadership.

Her party won elections in 1990, but was never allowed to take power. The generals in charge cannot understand why Aung San Suu Kyi commands so much admiration.

We were banned from filming her house, so we had to take pictures secretly in the early morning.

All the offices of her party, the National League for Democracy (NLD), apart from its run-down Yangon headquarters, have been forced to close.

His daughter’s influence also runs deep. NLD party officials within Myanmar feel they cannot alter policy without her express permission – but they are unable to talk to her in detention.

She told Gambari that she was in good health but needed more regular medical visits, according to a UN statement released after the meeting.

Critics say the government only allowed the visit to appease the United Nations but it did not mean changes the UN is calling for, including the release of political prisoners, are in the works.

We met one NLD official in secret and agreed to protect his identity. He told us people in Myanmar are suffering today – whether or not there are sanctions – economically and socially.

Things will only change, he said, when there is a people’s government and that will not happen until there is dialogue.

The NLD official said his party has asked for a dialogue but the government has not replied.

We were invited to hear the government’s point of view from Brigadier-General Kyaw Hsan, the information minister.

He was clear where the blame lay. The United States government, he said, was “trying to deteriorate the situation in order to put a puppet government in power”.

“The US government interfered in Iraqi affairs by misusing the UN,” he told us. “[They are] also trying to apply similar tactics in Myanmar.”

As for Aung San Suu Kyi’s confinement, the general told us she and the NLD “have been following the wrong path, calling on people to defy orders, inciting confrontations, calling for full sanctions, and relying on external elements.”

He disagreed that the crowds who turned out to hear the NLD leader speak when she was free mean that she is popular.

“Myanmar people are honest and simple, when Aung San Suu Kyi visited villages they were curious.”

The pre-industrial economic policies of self-reliance imposed by the ruling generals make a trip into Myanmar’s rural heartland like taking a step back in time.

Where other governments in South-east Asia have cashed in on the technology and services boom, Myanmar still encourages its people to plant more rice, beans and nuts.

The government says it wants to be on a par with its neighbours in less than 10 years. But economists say with current policies that just will not happen.

The military here is caught in a dilemma. A sign outside the old rail station proclaims what the government calls “The People’s Desire”.

The Cold War-era proclamation proudly rejects foreign destructive elements. But it is dwarfed by much larger billboards advertising commercial brands.

The government needs the money it could earn from opening up but cannot stomach the political changes the West demands for its business.

Myanmar itself is a complex tapestry of peoples and cultures whose loyalty to the centre is historically weak. It is like the old Yugoslavia or Iraq – an extraordinarily diverse country but also fragmented.

The government is at war in several border areas, displacing hundreds of thousands of people.

It says its firm control measures and emphasis on stability and order are necessary to prevent civil war.

But that means every resident of every household in Myanmar must register with neighbourhood officials, who must also be notified of gatherings of five or more people.

If anyone is caught in another house at night, both guest and host could be arrested.

Earlier this year, we were told the government asked all citizens to provide photographs for registration purposes so they could be monitored more closely.

Years of these kinds of restrictions mean people now just accept the situation. In front of the cameras, market stall holders are careful about what they say.

Off camera people will express their own personal views, but with us, almost every step of the way, were the government’s minders. They warned some people not to talk to us, then eventually stopped us from talking to anyone.

As for the future, government officials uniformly speak about when, not if, democratic change will come.

They promote the “road map to democracy” and how the constitutional convention that is part of its “seven step programme” will mean change is inevitable.

But analysts point out its delegates are government-appointed and that the convention still has not come up with a new constitution more than a decade after it began.

We were taken to the headquarters of the Union Solidarity and Development Association, a government-controlled grassroots organisation whose members account for an astonishing 40 per cent of Myanmar’s population

Their presentation showed its various social development projects, but there is another side.

Its members are alleged by some to have violently sabotaged pro-democracy gatherings and it is widely expected that if the generals eventually give up power, it will hand it over to the USDA.

We were also taken to a pre-school, run by a similarly, government-backed “non-government organisation”, called the Myanmar Maternal and Child Welfare Association.

There children recited the alphabet for us at school. They were lively and enthusiastic, their whole lives ahead of them.

United Nations statistics show that as many under-fives die each year in Myanmar as in Sudan. More Myanmar children are malnourished than in Somalia and Myanmar has more orphans than Afghanistan.

Educationally, half of Myanmar’s children fail to progress beyond primary level.

And yet Myanmar gets aid inflows that are 75 times less than Mozambique and 26 times lower than nearby Cambodia.

So while other countries debate how to deal with Myanmar’s ruling generals in ways that can really bring change, children, like the ones we met in Yangon, are going unheard, their needs unmet and their futures uncertain. 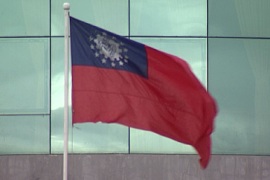 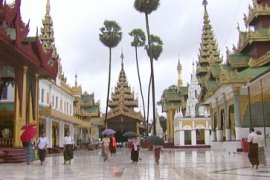 The challenges of reporting from inside one of Asia’s most secretive countries.