Mohammad Adow, reporting for Al Jazeera from Mogadishu, said: “The floods have destroyed roads and washed away bridges making the delivery of aid a very tall order.

“There is a ban on flights from Kenya and this is also hampering the aid effort.

“Five people have been killed by crocodiles and there is widespread fear of disease, particularly malaria.”

At least 80 people have died in floods in southern Somalia described as the worst for 50 years, and one charity said up to half a million children there needed emergency aid.

Concern over the ability of aid agencies to respond to the humanitarian situation in Somalia has been exacerbated by the country’s continuing civil war.

Francois Lonseny Fall, the UN envoy to Somalia, has urged the country’s fractured government to make a new commitment to faltering peace talks with the Union of Islamic Courts that has taken over much of southern Somalia.

The envoy told Yusuf on Monday: “We strongly urge the transitional federal institutions to remain committed to dialogue. The international community is very, very concerned.”

He said his focus was to persuade the government, which has been wracked by infighting, to come together and restart talks with the Union of Islamic Courts. 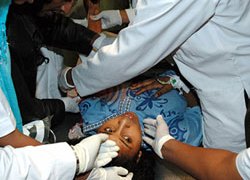