Hinting at a new strategy to gradually replace existing security forces – currently numbering more than 140,000 – Bush refused to commit to a specific timetable.

Instead he said he would wait for the recommendations of an independent panel in Washington due next month.

“I haven’t made any decisions about troop increases or troop decreases, and won’t until I hear from a variety of sources,” Bush said.

His visit to Indonesia, the world’s most populous Muslim nation, was marked by large demonstrations against the Bush administration and its policies towards the Muslim world.

In the capital, Jakarta, thousands of protestors thronged the streets chanting anti-American slogans and engaging in minor scuffles with police. 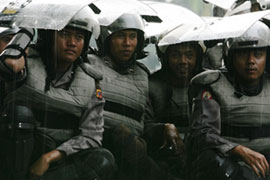 Monday’s talks between Bush and Yudhoyono took place in the small satellite city of Bogor, outside of Jakarta, which was surrounded by  security forces during the summit.

In the run-up to the meeting police said they had received several reports of threats, including a possible attack by a suicide bomber planning to infiltrate the crowds of protesters.

However, as Bush arrived, heavy rain around the summit venue drove many protesters to scatter for shelter, reducing the potential for clashes with security forces.

Commenting on the protests surrounding his visit, Bush praised what he said was a display of Indonesia’s democracy.

He also heaped praises on Indonesia, considered a key US key ally in the war against Islamic militancy.

“Indonesia is an example of how democracy and modernisation can provide an alternative to extremism,” he said.