The $12.8 billion ITER – which derives from the project’s original title of International Thermonuclear Experimental Reactor – will test nuclear fusion technologies.

Unlike existing fission reactors, which release energy by splitting atoms apart, ITER would generate energy by combining atoms. Despite decades of research, experimental fusion reactors have so far been unable to release more energy than they use.

If it is successful, a prototype commercial reactor will be built, and if that works, fusion technology will be rolled out across the world.

The EU is to put up half the cost of building the reactor, with the rest evenly divided among the other parties. The project will employ 400 scientists, two-thirds of them non-French.

Following years of wrangling, Japan agreed in 2005 to withdraw its bid to host the project – in exchange for 20 per cent of the posts including the director general’s job.

A Japanese engineer turned ambassador, Kaname Ikeda, was named earlier this month to head the project.

The European Commission President Jose Manuel Barroso, who was also in Paris on Tuesday, called the signing “a major event” and a step forward to finding new energy sources that did not cause climate change.

Chirac said the experimental reactor was “a hand held out to future generations” and predicted that, if it proved successful, “we will be able to derive as much energy from a litre of seawater as  from a litre of petrol or a kilo of coal.” 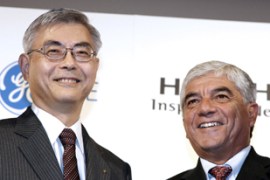 Hitachi and GE in nuclear deal

The two business giants agree to build and maintain plants in Japan and the US.

Environmentalists have rejected a claim by the World Nuclear Association that the world needs 20 times as many nuclear power plants to avoid the disastrous effects of global warming.