The transport blockade was established on Monday, by an alliance of 14 opposition parties, in protest at the appointment of a senior election official.
The parties had suspended an earlier four-day blockade on Wednesday but resumed the protests on Monday after talks with the president, Iajuddin Ahmed, broke down.
Witnesses said hundreds of activists, led by Sheikh Hasina, head of the opposition Awami League, blocked roads linking the capital, Dhaka, with Chittagong.
The opposition accuses the chief election commissioner, MA Aziz, of being biased towards their rivals, the Bangladesh Nationalist Party.
They say he has drawn up a list of voters for forthcoming elections that includes 10 million fake names.
A caretaker government is currently in place to oversee January’s poll.
Obaidul Kader, a senior Awami League leader, said: “We told the president that he had failed to prove that he is neutral. We had set Sunday evening as the deadline to remove the chief election commissioner and his deputies. But he failed.”
Weapons ban
Mahbubul Alam, a member of the interim government, said on Saturday that the government had come up with a package of measures it believed would end the impasse.
The president was expected to reveal the proposals in a televised address to the country over the next few days.
Last week’s four-day blockade shut everything from schools to ports and many people left Dhaka before the latest stoppage fearing violence or being stuck in the city.
Police have ordered an indefinite ban on the carrying of weapons and sticks during rallies or demonstrations in Dhaka and other main cities from Monday.
Two people were killed during clashes between the parties during the four-day protest.
Source: News Agencies 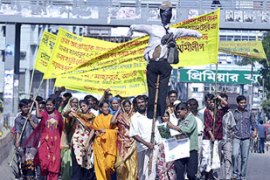 Thousands of demonstrators block highways in row over election official.