Shia parties joined together and formed an alliance, called the Unified Iraqi List, which was the biggest winner in the parliamentary elections in January. This meant that these parties formed the biggest bloc in parliament, occupying 140 of the 275 seats.

The alliance had to nominate a candidate for the premiership. Al-Maliki’s al-Dawa party did not have enough votes within the alliance to back its nominee, Ibrahim al-Jaafari, the former Iraqi prime minister, while Sciri ended up in the majority.

Members of parliament from the movement of Muqtada al-Sadr, a Shia leader, provided the support that al-Dawa party needed. 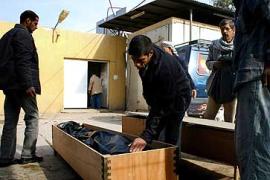 Some blame the unidentified bodies
phenomenon on al-Sadr loyalists

Dhafir al-Ani, an Iraqi MP from the mainly Sunni Arab Iraqi Accordance Front, said: “Al-Maliki does not want to take action against al-Sadr militias [known as the al-Mahdi Army] because he owes them his post.

“When al-Jaafari lost his Shia coalition support and Sciri wanted their nominee Abd al-Mahdi to take over, a deal was struck between the al-Dawa party and al-Sadr MPs to back the new al-Dawa nominee, Nouri al-Maliki, in return.”

Whether or not a deal was done, al-Sadr’s movement has enjoyed more power and representation under the new government. It had been regarded as anarchic by Shia parties in the previous administration – for refusing to take part in the political process that followed the US-led invasion of Iraq in 2003.

Abd al-Hadi al-Darraji, a spokesman for al-Sadr, said his movement’s aim is to establish agreement between factions in Iraq, not argument.

He said: “If we offered support to Mr al-Maliki, then we did so because we believed it would be for the benefit of Iraqi people.

“I believe the problem is not with what have now become known as the militias, but the problem lies in the presence of the occupation forces in Iraq.”

Al-Darraji blamed al-Ani for pointing blame at the al-Mahdi Army but not mentioning non-Shia armed groups, such as al-Qaeda and the Islamic Army.

“Whenever there is a religous occasion and Shia visitors go to visit their shrines they get killed if they pass Sunni areas,” he said.

“For example, whenever Shia vistors visit al-Kadhim, they get killed in the Sunni neighbourhood of al-Adamiya, which they cannot avoid to get to al-Kadhim.”

Al-Ani responded to al-Darraji comments and said: “More than 140,000 US soldiers and hundreds of thousands of Iraqi police and army soldiers are after the Sunni and nationalist armed groups, who is standing against the death squads?

“We have seen how the government reacted to the siege on al-Sadr city, it explains everything.”

On October 25, US and Iraqi forces mounted a ground and air assault against Abu Deraa, a militia leader blamed for a rash of sectarian killings and kidnappings of Iraqi Sunni. Abu Deraa is a commander in the al-Mahdi Army based in al-Sadr’s stronghold, al-Sadr city in east Baghdad.

Al-Maliki condemned the raid at the time, saying: “I said we agree on arresting wanted criminals and we do not care whether they are Sunni or Shia, but that was not an arrest operation. Do you send in planes to arrest one person?”

US and Iraqi forces tightened their siege of al-Sadr city after news that a US soldier of Iraqi origin had been kidnapped, allegedly by al-Sadr militias.

A week later, al-Maliki ordered the siege lifted. The prime minister’s office said in a statement that this was “to ease the traffic” in and out of al-Sadr city.

“But what I would really like to emphasise here are two facts: Firstly, if we scan news before and after the siege of al-Sadr city we will see a clear decline in the number of unidentified bodies thrown in the streets of Baghdad. “The US army in Iraq itself has been embarrassed that the security level in Iraq has fallen to this shameful level because of the militias’ acts.”

US forces have recently raided several al-Sadr strongholds in Baghdad, including one this week on al-Shula district in the west of the capital.

Al-Sadr’s movement says that there are “rogue” commanders who are misusing their affiliation with al-Mahdi Army to carry out their own agendas.

Sheikh Jaber al-Khafaji, the preacher who speaks for al-Sadr at the al-Kufa mosque, said in a Friday prayer last month: “This disobedience to the leadership has divided us and earned us multiple enemies. The directives of Muqtada al-Sadr in his speech during Eid prayers should not go unnoticed.

“If you do not obey, you will regret it. Indeed, I declare that you will be cursed. Sayid [a religious title meaning that the bearer is a descendant of Prophet Muhammad) Muqtada al-Sadr is a blessing from God upon you and is your protector.”

The UN estimated in July that 100 people are killed every day in Iraq. Ali al-Shamari, the health minister, was quoted last week as saying that about 150,000 Iraqis had been killed since the US-led invasion, and up to 500,000 wounded.

This week, Iraq Body Count estimated, based on press reports, that between 46,943 and 52,053 civilians had been killed since the invasion. That figure did not include Iraqi security forces or anti-US fighters.