His comments came after the UN and the Lebanese government agreed on Thursday that a tribunal to prosecute the suspected killers should be composed mainly of international judges.

Kofi Annan, the UN secretary-general, said in a report to the UN Security Council that having a majority of international judges in the mixed tribunal would help ensure its independence.

Lahoud, who is regarded as pro-Syrian, challenged that decision, saying that the country’s latest political crisis and the resignations of the government’s Shia and pro-Syrian ministers have stripped it of its authority.

“When according to our constitution one complete sect of religion leaves the government.. no power stays legal,” he told Al Jazeera.

“Because of that they are not legal and when they met they were not legal and they sent it to the UN,” he said referring to the meeting held on the subject by the anti-Syrian prime minister, Fuoad Siniora, on Monday.

Lahoud also repeated his recent accusations that Jacques Chirac, the French president, was meddling in Lebanon’s affairs and was trying to influence the UN.

“Mr Chirac is getting into all the interior matters of the UN… and you know they have the veto as well.”

Lahoud also denied any involvement in the assassination of al-Hariri and said he hoped “the tribunal will be a real tribunal and will seek justice and not become politicised.” 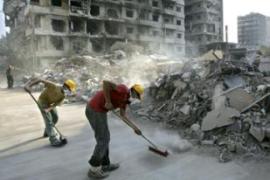 Israeli warplanes have carried out low-level flights over Lebanon, a day after Israel rejected a call by France’s defence minister to halt violations of the country’s airspace.