Sudanese government officials and a faction of the Sudan Liberation Army rebels to celebrate their signing on Saturday of an agreement aimed at bringing peace to Darfur.

“To be occupied by the Sudanese army is better than to be occupied by UN forces, and the biggest disaster is if the Atlantic army came and positioned itself in Sudan,” he said, referring to Western troops.

The UN and the African Union (AU) have been pressing Sudan to accept a UN-led peacekeeping force in Darfur to halt three years of violence that has killed tens of thousands of people.

Rebels took up arms in early 2003 accusing Sudan‘s government of marginalising the remote west. Khartoum mobilised militias to quell the revolt. Those militias stand accused of atrocities against civilians being investigated by the International Criminal Court.

Gaddafi is a longstanding opponent of the International Criminal Court in the Hague, which he has dismissed as a dispenser of victors’ and colonisers’ justice.

He accused the West of wishing to defeat his plan to form a single African federal government in a so-called United States of Africa.

“The West exploits tribalism, sectarianism and (skin) colour to feed war, which leads to backwardness and Western intervention in a number of countries,” he said.

“All the conflicts in Africa are caused by colonialism, which does not want the rise of the United States of Africa and works for division and interference and for military coups.” 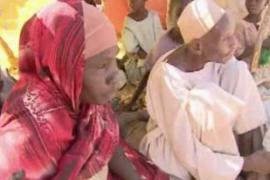 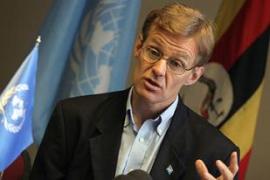