Important role
Western powers demand that the Islamist movement Hamas renounce violence, recognise Israel and agree to stick to peace agreements reached by previous Palestinian governments.
“I do not understand how an embargo can be imposed on a government that has been democratically elected and how collective sanctions can be imposed on the whole of the people,” Sheikh Hamad said at the session in Strasbourg.
Qatar has retained ties with Hamas and helps the group with private and public financial contributions and is believed to have ties with its nationalist rival, Fatah.
The small country hosts the US military’s Middle East command headquarters, and has played an increasingly important role in the region since ending its isolationist foreign policy.
Source: News Agencies 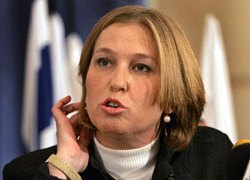 Tzipi Livni, the Israeli foreign minister, has cancelled plans to attend a UN meeting in Qatar because of the expected presence of Palestinians from the ruling Hamas group.

Qatar’s mediation efforts to resolve a stalemate preventing the formation of a unity government between rival Palestinian leaders have failed.