Musharraf dismissed assertions that extremism could lead to a third world war, but said resolving the Palestinian crisis, providing a concrete redevelopment plan of Afghanistan and increasing jobs in Pakistan would reduce the number of people turning to violence.

Intelligence ties
Blair and Musharraf are expected to discuss closer ties between their interior ministries, intelligence services and universities.
They said they would fund Islamic schools they see as moderate and create more job opportunities in Pakistan while promising to stamp out Taliban fighters in Afghanistan and Pakistan.

They also called for a resolution to the Palestinian-Israeli crisis, seen as the catalyst for support of al-Qaeda worldwide.

Blair said the war against extremism would fail unless more was done to support moderate political and religious forces.

“This terrorism that we are facing, of which one manifestation is what has happened in Afghanistan, has been a long time going and will take a long time to defeat,” he said.

On Saturday, Blair agreed to increase planned funding for a programme to create Pakistani religious schools teaching from $450 million to $910 million.

He said Britain would provide two MI-17 helicopters by next April for the use of anti-narcotics forces patrolling the Afghan-Pakistan border.

“This will promote the climate for enlightened moderation to which the president and the prime minister both aspire not just in Pakistan, but also globally,” a joint Blair-Musharraf statement said.

Blair’s visit comes amid heavy fighting in Afghanistan against the Taliban in which more than 30 British soldiers have died this year.

Pakistan’s central government says it is trying to cut off the broad-based support the Taliban receives in its northwestern tribal areas bordering Afghanistan.

“We are in the middle of a difficult global struggle that has many aspects to it, including what is happening in Afghanistan,” he said. “Our task is to take on the extremists wherever they are. I believe we will win.” 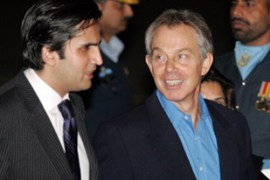 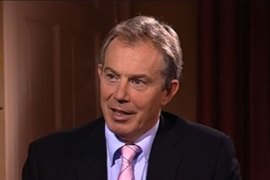