The G20 finance ministers and central bank governors said that although the outlook remained positive, the growth rate “is expected to decline slightly from the rapid pace of the last few years”.

“We need to take advantage of the present strength in the global economy to get policy settings right.”
In the face of potential inflationary pressures, the normalisation of monetary policy would need to continue, and fiscal policy needs to be adjusted in anticipation of slower revenue growth and higher spending.
“We are determined to implement these policies, which are also required to enable global imbalances between countries to unwind in an orderly manner,” the leaders’ statement said.
On Saturday, Rodrigo de Rato, the International Monetary Fund managing director, agreed global prospects were good, but that the slump in the US housing market posed a risk.
“What we see right now is certainly not a sharp deceleration of the US economy, although a risk of an abrupt deceleration of the US economy is certainly one of the risks the world economy is facing now,” he told a briefing.
Overall, he said the IMF was still forecasting a year of robust and more balanced global growth. The IMF is projecting global growth of five per cent this year.
The G20 includes the G7 nations – the US, Germany, Japan, France, Italy, Britain and Canada – as well as the European Union, Argentina, Australia, Brazil, China, India, Indonesia, Mexico, Russia, Saudi Arabia, South Africa, South Korea and Turkey.
IMF and World Bank officials have also been attending the G20 meeting.
Source: News Agencies 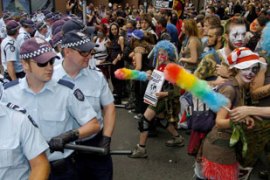