Addressing the Mauritanian people, through an interview with Al Jazeera, Vall said: “I tell them that they are in front of a historic opportunity which is rare in their country and in all the countries in the area where they are.”

A military junta deposed the authoritarian government of the Saharan country’s long-time leader Maaouiya Ould Taya in a bloodless coup in August 2005 and pledged to usher in democratic reforms aimed at return to  civilian rule.

After a landmark constitutional referendum in June, Sunday’s local and parliamentary poll is a major milestone ahead of planned senatorial elections in January, followed by presidential election in March 2007.

Vall, the military leader, has confirmed that he would not stand in any presidential elections in the future.

He said the elections would be ‘honest and transparent’ and carried out under the supervision of the African Union (AU), the European Union (EU), the Arab League and some US organisations.

“There are positive indications on the neutrality of the administration,” Mohamed Ould Moloud, the president of the Union of Forces of Progress and the current rotating head of the opposition Forces  of Change for Democracy Coalition, said.

“If this is confirmed on the day of the vote, it will be a  success for our democratic experience.”

Frank-Walter Steinmeier, the German foreign minister, visited the Mauritanian capital Noukachott on Saturday in a show of support.

Steinmeier said Mauritania had begun a democratisation process  “under the most difficult conditions” and that he hoped to find  areas where Europe and Mauritania could work together to keep the country on that track.

Campaigning for the elections officially ended at midnight on Friday.

Results are to be announced on Tuesday, with a second round of legislative voting scheduled for December 3.

The Independent Electoral Commission, the first of its kind since independence, said that “all was in place” in the 2,336 voting  booths scattered across the desolate, western African country and  hailed a campaign that wound up Friday “without any major  incident.” 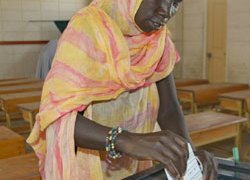 Mauritanians have voted hugely in favour of limiting the number of terms future presidents can serve, early indications from a referendum in the Islamic republic have showed. 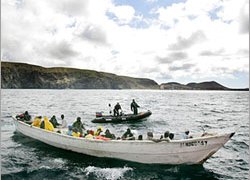 Mauritania has appealed for international help to stem the flow of African migrants trying to leave the country for Europe.