Shaikh Hadi al-Khalisi, a Shia cleric from the Hawza of al-Kadhimiya, said the arrest warrant shows the government’s confusion and loss of control.
He said: “It is a clear sign that the government is targeting patriotic, anti-occupation figures to silence them.”
Constitutional violation

Al-Khalisi said: “The arrest warrant is a clear violation of the constitution that this government itself brokered. The constitution stipulates that religious authorities would not be harassed, and here they are violating that.”

He said the warrant is at odds with the Mecca document which al-Dari and members of the current Iraqi government signed last month.

The arrest warrant, if carried out, is expected to worsen sectarian divisions in Iraq.

“[The] Mecca document stipulated that every party would avoid provoking sectarianism, and consolidate the unity among Iraqis. This arrest will trigger further hostility and would not serve the purpose of [the] Mecca document at all,” al-Khalisi said.
Abu Muhammad, a spokesman for the Baath Party, condemned the arrest warrant and said it was an attempt to target nationalist Iraqis.
Religous symbols

The Iraqi Islamic Army, one of the country’s main armed groups opposed to the US military presence, also condemned the arrest warrant in a statement sent to Al Jazeera.

“This mean decision is designed to target revered religous symbols. It is an insult to every honourable Arab person. They want to silence any anti-occupation voice,” the statement said.
In Najaf on Friday, a pro-government Shia cleric addressing worshippers called al-Dari an instigator of sectarian disunity and a “gangsters’ boss”.
He said: “The sentence against al-Dari would represent the removal of a self-imposed Sunni leader.”
Al-Dari is an outspoken opponent of the government. He calls for the cancellation of the political process in Iraq, saying it has been orchestrated by “US occupation authorities”.
Source : Al Jazeera 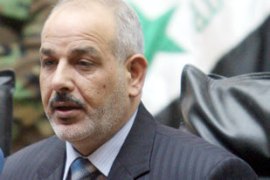 Harith al-Dhari said the calls for his arrest will worsen Iraq’s sectarian conflict.