There were no vetoes in the 192-member General Assembly, and the chamber’s resolutions are non-binding, but considered more a reflection of international opinion.

Riyad Mansour, the Palestinian observer in the UN, told the General Assembly that Israel had committed war crimes against Palestinian civilians in its nearly five-month old offensive.

“What is required is serious and firm action in response to these crimes, especially the massacre in Beit Hanoun, as well as putting an end to this rampant Israeli campaign, which intends to destroy an entire people,” Mansour said.

Dan Gillerman, Israel‘s UN ambassador, accused the Palestinians of turning the Gaza Strip into a launching pad for “terrorist” attacks against Israel, and called the session a “circus” and a “farce”.

He said Israel had been forced to defend itself because the Hamas-led government had not acceded to international demands to renounce violence, recognise Israel and honour past peace agreements with the Jewish state.

“The debate this morning … offers the Hamas government no incentive to renounce their ways of terror,” he said.

John Bolton, the US ambassador to the UN, said it was ironic that the assembly held a special session on the Palestinian question a day after one of its committees passed a resolution stressing the need to avoid politically motivated and biased human rights resolutions.

“We believe that the United Nations is ill-served when its members seek to transform the organisation into a forum that is little more than a self-serving and polemical attack against Israel or the United States,” he told the session.

A last-minute addition to the resolution called on the Palestinian Authority to take action to bring an end to violence, including the firing of rockets on Israeli territory.

Nassir Al-Nasser, Qatar‘s UN Ambassador, said many of the same changes had been made to the Security Council draft resolution last weekend in an attempt to get all countries on the powerful body to support it. 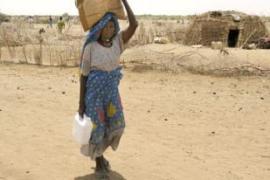 Sudan denies earlier reports that it agreed to UN forces in Darfur.