Yastrzhembsky said Russia hoped that the EU would resolve the row with Poland but would not be overly concerned if it failed to do so before next week’s summit.

Benita Ferrero-Waldner, the EU external relations commissioner, called on Poland to lift its objections to the talks with Russia, saying that the summit would go ahead regardless.

Diplomats say Moscow is well aware of how badly the EU needs its oil and gas.

Recently, a Nato economic committee said that a Russian-backed “Opec for gas” was possible, suggesting that Russia might be aiming to draw Algeria, Libya, Qatar, the countries of central Asia and possibly also Iran into an energy cartel.

Russia supplies a quarter of Europe’s gas and Nato sources sees such an association as strengthening Moscow’s hand in its relations with Europe and particularly with its neighbours, Ukraine and Georgia.

Expensive oil and gas took centre stage as finance ministers from the world’s wealthiest nations met for talks in Russia, whose vast resources are regarded as part of the problem as well as the solution. 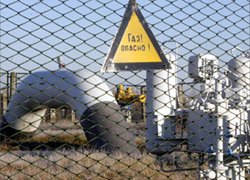 Europe is beginning to feel the chilling effects of the dispute that has led Russian energy giant Gazprom to cut supplies to Ukraine while the Ukraine president has met ambassadors from EU states, Japan and the US in Kiev to discuss the crisis.