Abdullah is head of the Barisan Nasional coalition led by Umno and comprising the Indian-based MIC and the Chinese supported MCA, along with several other minor parties.

Liow Tiong Lai, the head of MCA’s youth wing, said the statements made by young Malay leaders at the general assembly were vicious.

“It is regretful that the Umno youth assembly was shrouded in an atmosphere of fiery and emotional sentiments, remarks that were more poisonous and unreasonable than those of the opposition,” said Liow, who is also a deputy minister in the Abdullah government.

Abdullah’s unwillingness to alter an unwritten social pact among the various races in the country has caused much consternation.

There have been many calls to revise this unofficial contract of political power distribution, which the founding fathers of Malaysia developed prior to independence in 1957.

Many today argue that the agreement is outdated and that non-Malays should have a greater say in the country.

Abdullah said in the English media that he wanted all races to work together, but his comments in the Malay-language Utusan Malaysia were stronger.

“If we change this balance and if we are forced to meet all over again on the rights of every group, it will not be the same as now. It would be far from satisfactory. Whatever the new formula, it will not succeed because the old formula is enough, is already maximum. As everyone had agreed to this before, why do we want to disturb this and meet again?” he said in the Utusan.

Fazil said the prime minister was playing to his audience.

“People who read the English papers are middle class, rational thinkers and value logic. They expect a more moderate position and tone. He is saying the right thing to them. For the people who read the Malay papers, they are more the working class, more emotional and the points he is making to them is definitely much stronger. He is saying and doing the right things for them politically.” 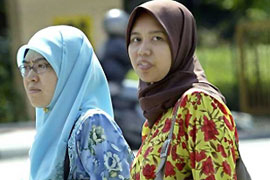 Some non-Malays are also unhappy with the continued application of the country’s New Economic Policy (NEP).

The NEP was implemented in the 1970s to reduce the income disparity among the different races, especially between the poor Malays and rich Chinese.

It was supposed to have been achieved in 20 years but the policy carried on after 1990 under a new name, the New Development Policy and was to have expired in 2000.

A National Vision Policy was to have been implemented after 2000 which would be more equitable to the various groups but the government under its 9th Malaysian Plan, launched earlier this year, reinstated the original NEP.

A huge debate then ensued over whether the NEP target had been reached with the government saying the NEP would now continue to 2020.

In his speech to the Umno general assembly, Abdullah said: “The debate is now about the process rather than about philosophy and objectives”. He said his government will continue to “focus on reducing the income gap between races” as “true balance is a prerequisite for sustainable development”.

“Whatever policy is drawn up should take into account the interests of all races. I hope the government can honour its promise to implement the National Vision Policy.”

Another area under the spotlight is the setting up of an inter-faith commission. Various groups have been pushing for an independent body to examine issues that have given rise to conflict between the different religious groups.

Many Muslim groups have viewed this as an attack on their religion and there have been confrontations at several forums discussing the creation of such a commission.

Khoo Kay Peng, a political analyst, said the commission was initially rejected by other Umno leaders but Abdullah’s attitude was to go slow, postpone discussion and see what happened. “He did not reject it offhand,” said Khoo.

At least not in the English media.

In the interview with Utusan, he said: “Actually, I did not at any time say that we in Malaysia need an inter-faith commission. This is because I am of the view that in this country all of this is secure and the nation understands that religious issues should not rightly be brought up. This is not on the agenda for discussion. Accept the formula that has been determined by previous leaders.”

Abdullah said that he has provided a “more open environment which has allowed debate but this has digressed to a level where the line on religion and race issues have been crossed”.

“The openness we are seeing today is a new phenomenon for Malaysia”, he said.

He added, however, that “no one should even attempt to test the government’s resolve on this issue. If the need arises, the government will act swiftly and firmly in enforcing the existing laws to ensure that our peace, stability and prosperity is not jeopardised.”

“I think for the non-Malays they are in a cul de sac. Where else can they turn to? The only credible party that can win in elections is Umno and Umno is playing that card.”

Said Khoo: “He has actually strengthened the people’s perception of him. Many view him as an Islamist, as a real champion of the Malay agenda. He is not a Renaissance man as many thought previously.”