He said: “I appeal to the Israelis: Do not waste this chance for peace. Enough with the shedding of the blood of our sons and yours.

“This is the hour of truth, because peace in this region will not be achieved except by Israel’s full withdrawal from the Arab and Palestinian territories that were occupied in [the Middle East war of] 1967.

“The path to security and peace is only one, and this is by your commitment to our national rights, your withdrawal from our land, your implementation of international laws, and finding a just and agreed-upon solution to the refugee problem.

“I announce in the name of our Palestinian people our full preparedness to begin serious and final-status negotiations that will put an end to decades of conflict and blood,” he said.

Ehud Olmert, the Israeli prime minister, whose own popularity at home was undermined by the recent Lebanon war, said after meeting with George Bush, the US president, during a visit to Washington this week that he was ready for “serious dialogue” with Abbas.

Earlier on Wednesday, a 70-year-old Israeli woman was killed in a Qassam rocket attack from Gaza, and several Israelis were wounded in a second salvo.

It was the first Israeli casualty in over a year, fuelling resentment in the country’s south which regularly comes under rocket fire from across the border.

The second rocket strike seriously wounded an Israeli security guard and a youth in Sderot.

Israeli medical sources said that several other residents of the town were slightly injured in the attack.

The armed wing of the ruling Hamas movement, the Izz al-Din al-Qassam Brigades, said it fired at least two salvoes at Sderot and claimed responsibility for the death.

It said the rocket attack was in response to Israeli shelling last week that killed 19 Palestinian civilians.

The Islamic Jihad group said it had launched the day’s second barrage of two rockets.

Sderot is a frequent target of Palestinian rocket squads because it lies just 5km from Gaza. Rockets also hit a nearby village but no one was wounded.

According to the Palestinian Red Crescent Society, 4,286 Palestinians have been killed since the beginning of the second Palestinian intifada – or uprising – in September 2000 and October 31 2006. 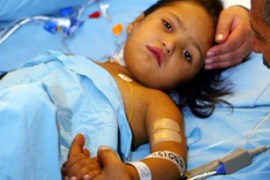 Palestinian health services are closing down because of a lack of funds. 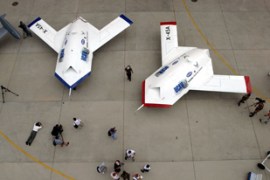 Drones spy from the sky and guide attacks on the occupied Palestinian territories.