Bush said a free-trade zone encompassing all the Asia-Pacific countries “deserves serious consideration,” despite a rebuff of a US bid to make the proposal a part of this year’s Apec gathering.
Body language
Lee Hsien Loong, Singapore’s prime minister, and the first Asian leader to meet Bush on the trip, told the president: “Our interests are aligned.”
Michael Green, a Washington-based Asia expert, said: “Asian leaders will be looking at president Bush’s body language.
“They’re going to be all looking to see how he plays the game after [his] political setback.”
Bush called for resolve in the fight against terrorism and is expected to push the same message hard in next week’s visit to Indonesia, which is fighting al-Qaeda-linked fighters.
Some Asian leaders are expected to raise concerns in Hanoi about China’s rising power.
Large demonstrations
Bush will become the second US president to visit Vietnam – after Bill Clinton – since the war there that traumatised the US a generation ago.
His trip is expected to raise comparisons between the Vietnam conflict and the Iraq war.
Before travelling to Vietnam, Bush will make a stopover in Indonesia for talks with his counterpart there, Susilo Bambang Yudhoyono.
On Wednesday, in an unusual sight for Indonesia, about 100 demonstrators joined a rally in the Javanese city of Bogor in support of Bush’s visit.
Indonesia is the world’s most populous Muslim nation and in recent years has been the scene for large demonstrations against US policy in Iraq and the wider Muslim world.
Source: News Agencies 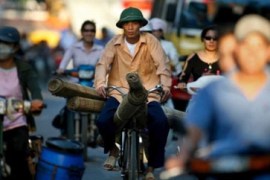 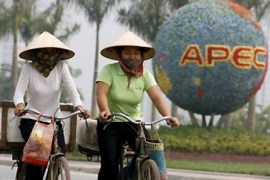