Annan said: “We are looking at the possibility of putting UN observers or some sort of international presence on the border and working with Chad’s government to ensure refugees there are protected and cross-border attacks are minimised.

“But we have not given up the idea of strengthening the force in Darfur.”

The UN hopes to reinforce the AU force with hundreds of peacekeepers and technical support, eventually forming a large “hybrid” force under joint command.

Annan will take part in talks on the Darfur crisis on Thursday in Ethiopia.

He said: “We need to continue our efforts to calm Darfur and try to stabilise the situation, get assistance to the internally-displaced people and gain access for the humanitarian workers, while we press ahead with the implementation of the political process.”

The Darfur region has been poorly protected by the under-resourced AU troops, whose mandate expires on December 31, from repeated attacks.

The conflict broke out in 2003 when local people, mainly non-Arabs, took up arms to fight for a greater share of power and resources.

The government has backed Arab fighters known as Janjawid, who locals say have pillaged towns and raped and killed residents.

Fighting between the government and Darfur fighters has spread into  Chad and the Central African Republic.

Annan has tried to increase the influence of the UN, by inviting the Security Council’s permanent members to talks in Addis Ababa, along with others from Egypt, Gabon, the European Union and the Arab League.

Jean-Marie Guehenno, the UN undersecretary-general for peacekeeping, said Sudan was insisting that the AU remain in charge of the force in Darfur.

According to to a transcript of a closed meeting of the Security Council, Omar Hassan Bashir, the Sudanese president, was generally supportive of the “lighter option” of UN assistance to the African Union Mission, known as Amis.

But he said “UN military and police personnel deployed in support of Amis should wear ‘green’ – [such as] Amis berets, which will not be acceptable to the United Nations”, Guehenno said.

But he said Khartoum was willing to discuss the use of UN support units to Amis and a greater UN role in the political aspects of the strife.

“The proposal goes a long way to meeting the Sudanese government’s stated concerns about a UN force,” the official said. 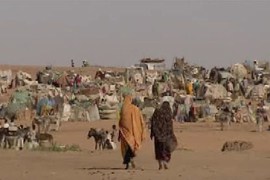