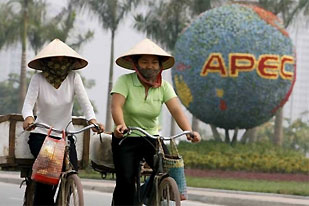 Leaders of 21 Pacific Rim economies
are gathering in Vietnam

Bringing together 21 heads of state from around the Pacific Rim, the Asia Pacific Economic Co-operation (Apec) forum is officially aimed at boosting trade and investment across the region.

In the 16 years since its foundation, however, Apec has evolved into a platform for tackling a broad range of subjects.

This has been particularly the case since the September 11, 2001 attacks, with the Bush administration using the annual meeting to tackle issues of regional and global security.

The following are some of the key topics likely to be discussed at the 2006 meeting in Hanoi:

Coming just over a month after North Korea tested its first nuclear weapon, Pyongyang’s weapons programme – although not on the formal agenda – is expected to dominate discussions over regional security.

North Korea itself is not an Apec member and will not be attending the summit, but the leaders of Russia, Japan, China, South Korea and the United States, along with their senior foreign policy staff, will all be in Hanoi.

They are expected to use the gathering to build common ground before the resumption of six-party talks with the North, tentatively scheduled to take place later this year.

China in particular is expected to face pressure from several sides to use what influence it has to rein North Korea in.

Speaking ahead of the meeting, Japan’s cabinet spokesman said it would be looking to Asia-Pacific leaders “to send a united and strong message of international consensus” to Pyongyang.

Leaders are expected to call for a last-ditch push to revive the stalled Doha round of World Trade Organisation talks.

Backing this up, the summit is due to adopt a five-year “Hanoi action plan”, laying down specific policies for lifting trade barriers within Apec and building on proposals outlined at the 2005 meeting in Busan, South Korea.

However, critics say that because Apec commitments are non-binding on its members, agreements made carry little or no weight.

An Apec-wide free trade and investment pact was first mooted at the summit in Bogor, Indonesia in 1994 and is still yet to become a reality. The slow progress is perhaps best illustrated by the draft title of the planned 2006 declaration: The Hanoi Plan of Action Plan on the Busan Road Map towards the Bogor Goals.

Despite this, Apec supporters point to a surge in Pacific trade since the organisation’s founding in 1989, brought about by liberalisation and tariff cuts of more than 30 per cent across the board.

Counting some of the world’s fastest growing economies among its members, sustainable development and protection of the environment have become key issues for the Apec region.

John Howard, the Australian prime minister, has said he intends to bring up the issue of energy security and climate change at the meeting.

Australia, along with the US, has refused to ratify the Kyoto Protocol on reducing greenhouse gas emissions and says it is searching for other ways to reduce carbon pollution, primarily through technology.

Howard has said he believes no country, developed or developing, will agree to climate change measures which endanger its future energy security requirements.

Bringing together some of the world’s most powerful nations, Apec has become an important platform for building bilateral relations.

Shinzo Abe, Japan’s new prime minister, is likely to use the meeting to help patch up relations with China and South Korea which have been strained by disputes over Japan’s wartime past.

Meanwhile Vladimir Putin, the Russian president, is expected to use the meeting to build up regional ties as relations cool with the US and Europe.

For George Bush, the US president, the meeting is his first overseas visit since the hammering his Republican party received at the US mid-term elections.

Analysts say he will be eager to use the meeting to revive his wounded presidency and prove himself on the world stage.

For host Vietnam, the economic side of the gathering will be particularly important, giving the communist nation an opportunity to showcase the achievements of two decades of reforms that have made it South-east Asia’s fastest growing economy.

But much of the attention is likely to be on China, fast becoming the economic linchpin of the entire region.