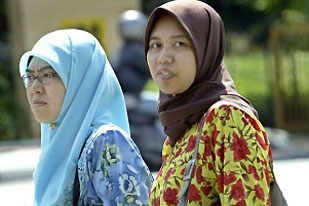 A widely circulated text message is being blamed for stoking religious tensions in Malaysia.

The SMS sent this month led to hundreds of Muslim protesters gathering outside a Roman Catholic church in the northern town of Ipoh to try to stop a rumoured conversion of 600 Muslim students to Christianity.

The incident on November 5 outside the Our Lady of Lourdes church is being investigated under Malaysia’s sedition act.

Police have said they intend to question Harussani Zakaria, the mufti of the northern state of Perak, and Azhar Mansor, a locally famous sailor, who were both named in the message.

Officials said they were trying to find out whether the allegations – that Azhar would be leading 600 Muslim students through baptism – originated from a talk Harussani gave at a mosque programme this month.

Neither man could be contacted. However, Harussani has since identified a woman in her 40s as the source of the SMS, which he said he sent to representatives of Muslim groups out of concern.

But, speaking to reporters this week, he said he had cautioned against any protest without evidence.

Bernard Paul, a parish priest in Ipoh, said that about 100 children were in his church when he saw between 200 and 300 protesters approaching.

“We heard chanting of anti-apostasy slogans,” he said. “Police were trying to seal off the roads around the church but that attracted more curious onlookers. The protesters ignored warnings to disperse until about noon.

“Senior officers assured us that everything was under control but the crowd kept swelling. There were verbal threats of burning down the church and someone threw firecrackers into the compound.

“That night, a motorcycle gang rode past the church chanting and hurling rocks. A lady was hit on the thigh and later lodged a police report. We made similar report earlier over the disruption of a religious service.”

Paul said that police had asked him about conversion procedures and the presence of Malays in the church about three weeks ago.

“But if police already knew about the allegations, why didn’t they do anything to verify the facts? They could have informed the church and we could have easily cleared the air in a statement to diffuse the tension,” he said.

Recent years have seen a series of anti-apostasy protests by Muslim groups claiming that Islam is being undermined by liberal Muslims and Malaysians who demand that their right to religious freedom under the constitution be upheld.

Just over 60 per cent of Malaysia’s population of 27 million are ethnic Malay-Muslims.

According to the Malaysian constitution a Malay is defined, among others things, as being a Muslim. 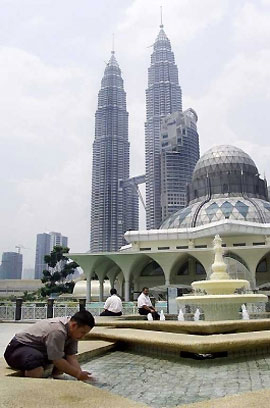 Sixty per cent of Malaysians are Muslim

Hermen Shastri, the general-secretary of the Council of Churches, Malaysia, described the reaction to the SMS rumour as “very worrying”.

“There definitely needs to be a defined policy on SMS messages,” he said. “This is not the first time such a message has been circulated.”

He said he had frequently received circulated SMS relating to the case of Lina Joy, a Malay woman who is trying to remove the word Islam from her national identity card.

The landmark case is currently awaiting a decision from the country’s highest court.

Hermen blamed “people with malicious and ill-intent” for circulating the SMS and trying to agitate more Muslims into taking to the streets stoke inter-religious tensions.

“The government has to come up with rules,” he said.

“If there are any grievances, people should lodge a police report. This is an intimidation tactic to instill fear. The rule should be that no one should go to places of worship of other faiths and interfere in their worship.”

Musa Mohd Nordin, founding member of the Muslim Professionals Forum – a body which aims to increase understanding of Islam in the English-speaking world – condemned the reaction.

“No ethnic or racial group should be acting on hearsay,” he said. “If the group of Muslims had congregated at the church based on an SMS and not evidence, I think that is very unfortunate and unbecoming for a Muslim group.

“A particularly inflammatory issue like this must be based on clear evidence. Even if the allegations were true, it was uncalled for them to demonstrate. A negotiation or meeting with the church would have been a better way to handle the situation.”

He also warned liberal Muslims against linking Sunday’s “isolated” incident with other anti-apostasy protests and said it was dangerous to use words such as “hate ideology”.

Zaitun Kasim of women’s rights group Sisters In Islam apologised for what she said was the “fear and anxiety” caused by the “actions of a small, ill-informed group of Muslims”.

“The despicable act of writing and forwarding the SMS itself was designed to sow hatred and ill-will,” she said.

“Islam, as with other religions, does not in any way condone any form of violence.”

She said she was “gravely disappointed that the actions of some Muslims have not only brought the religion into disrepute but have caused harm to other Malaysians”.

Citing a recent spate of incidents, Zaitun said that the Ipoh case pointed to “a regressive and damaging trend where individuals and groups have deliberately used religion to drive a wedge between the different ethnic groups”.

Explainer: What is the Delta Plus variant of COVID-19?