“I would say to the population of our country, to the Congolese people … that they should remain calm and wait for the publication of official results by the Independent Electoral Commission (CEI),” Kabila said on Wednesday.

Kabila said the police and army were loyal to him as president, suggesting security forces would not tolerate clashes with Bemba’s supporters. 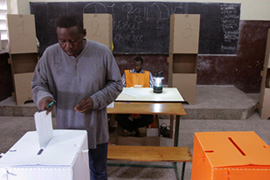 The October 29 vote was the culmination of a peace process to end Congo‘s 1998-2003 war, in which Bemba led a rebel faction before joining a power-sharing government.

It is DR Congo’s first full election in more than 40 years.

But the vice-president’s Union for the Nation coalition has already rejected the results. It alleges “systematic cheating” in the vote count and has questioned the credibility of the electoral commission.

It said on Tuesday that data collected by its own observers at polling stations showed Bemba led the election with 52.5 per cent of the vote.

The coalition said in a statement on Tuesday: “The Union for the Nation will not accept an electoral holdup that aims to steal the victory from the Congolese people.”

Kabila dismissed Bemba’s complaints, saying: “This is nothing but agitation by politicians who either know they have lost the elections or don’t even know what is going on because they have not been following the process.”

Bemba’s rejection of the results has stoked fears of further violence, but the city’s streets were calm on Wednesday.

Soldiers loyal to the two candidates fought bloody street battles in August which killed at least 30 people after the first-round results were announced.

Four more were killed last Saturday when the two sides clashed once again.

A 17,500-strong UN force and a special European Union contingent have stepped up patrols in the country to head off any unrest.

Two people have been killed after fighting broke out in the Democratic Republic of Congo between forces loyal to two contestants in parliamentary elections.

Congolese go to the polls

The Democratic Republic of Congo is holding the second round of a national presidential election that is intended to end decades of civil war.

A bloc led by the country’s president has won the Democratic Republic of Congo’s (DRC) first free multi-party legislative elections in over 40 years, but failed to secure an absolute majority.

Congo vote goes to run off

Initial results in the Democratic Republic of Congo’s election have not produced a clear winner, meaning that the vote will now go to a run-off.