Speaking on Europe 1 radio, Strauss-Kahn, a former finance minister, denounced as a “lie” the claim made by Royal before a rally of supporters that he made a sexist remark about her after a televised debate.

“I never said anything of the kind. And I find it disgraceful that people can use this kind of argument. Feminism is a noble cause, but you don’t grow up by making remarks like that,” he said.

After a speech on Monday, Royal, 53, quoted Strauss-Kahn as saying after a debate on international affairs that “she would have done better to stay at home instead of reading from her recipe-cards”.

Royal also used a quote attributed the former prime minister and third candidate in the race, Laurent Fabius, who allegedly said on hearing of her presidential ambitions: “Who’s going to look after the children?”

Royal has four children with her partner, the socialist leader, Francois Hollande.

Fabius repeated his denial of the quotation on Tuesday. “Those who know me know that I am not a chauvinist,” he said.

With tensions running high on the last day of campaigning, Strauss-Kahn launched an outspoken offensive against Royal, accusing her of incoherent policies.

“She has spent the campaign correcting and modifying. In five weeks of campaign there have been five major corrections … I note that there are 25 weeks till the presidential election,” he said.

Royal has been accused of producing a series of crowd-pleasing measures which go against PS orthodoxy, such as boot-camps for young  delinquents and “popular juries” to monitor elected politicians.

Results of the socialist ballot will be known early Friday.

Meanwhile the wife of current president, Jacques Chirac, said her 73-year-old husband had not completely ruled out running for a third term.

Bernadette Chirac told Nouvel Observateur magazine that her husband was in fact in “great shape” and would decide early next year whether to run or not.

The presidential election takes place on April 22. A run-off vote is scheduled for May 6 if, as expected, none of the candidates wins at least 50 per cent of the votes in the first round. 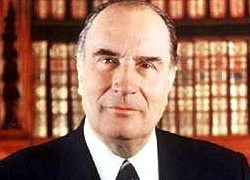 France on Sunday marked the death 10 years ago of Francois Mitterrand, the nation’s longest-serving president who, for some, is taking on cult status despite scandals that haunted his 14 years in office.