In the capital, opposition protesters burnt Aziz in effigy and marched through the streets chanting “sack Aziz and save the country”, witnesses said.
Aziz, appointed by the outgoing Bangladesh Nationalist Party (BNP), has refused to quit.
Akbar Ali Khan, a member of the interim government’s cabinet, said: “We have very little time in our hand but we can assure the people that we will reach a solution within a very short time.”
‘Big differences’
The caretaker administration, in place to oversee fair elections in January, completed talks with the country’s political parties over the standoff on Wednesday.
It has held discussions since Monday between the two main parties, the Awami League and the BNP, which led the outgoing government coalition.
The interim cabinet was due to discuss the situation and reach a decision, Khan said, but “big differences” between the parties still remained.
Twenty-five people have been killed during the protests and police urged supporters of rival parties to hold rallies at separate locations to avoid further bloodshed.
At least 20 people were injured in clashes between the two parties supporters in the north-eastern city of Sylhet.
“We have stepped up security to avert any clashes between the two main parties but we also asked the political leaders to hold rallies in different places,” a police spokesman in Dhaka said.
Meanwhile, deliveries to and from the country’s main port in Chittagong in southeastern Bangladesh remained suspended for a fourth day despite pleas from business leaders.
“All the roads and rail lines are still blocked by the opposition protesters,” the port director, Kamrul Islam, said.
Source : News Agencies 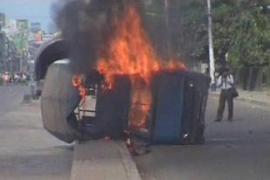 A man is killed and several people injured as protesters clash with police in the capital.

The Bangladeshi president’s talks with top advisers have failed to resolve a standoff between the country’s two feuding political groups.